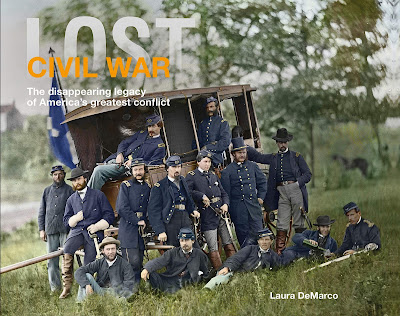 In a Zoom chat, author Laura DeMarco and I talked about her new book, Lost Civil War: The Disappearing Legacy of America's Greatest Conflict. The recently published book (Pavilion Books, 176 pages) is lavishly illustrated with period photos of battlefields and historic places. In our nearly 28-minute visit, we discussed a Gettysburg site few know about, Antietam's Dunker Church, and a fort in Louisiana that had ties to (gasp!) a cult. Heck, we even discussed the Cleveland Browns, who (sadly) may dominate the AFC North this season. That's a tough sentence for this longtime Steelers fan to write.
Here's more on DeMarco at her author page. Here's where you can purchase the book on Amazon.com.
Below, Laura offers a list of sites she wishes had been preserved and/or properly memorialized. Plus, an outside-the-box bonus.

SHENANDOAH VALLEY BATTLEFIELDS: Some of the most important battlefields of the Civil War in Virginia are buried under asphalt and concrete. A drive down Interstate Highway 81 provides a tour of Shenandoah Valley Civil War battlefield sites — planned or not. The interstate travels through the valley for 150 miles, cutting through seven battlefields as it winds through the picturesque countryside, including: Second and Third Winchester, First and Second Kernstown, Cedar Creek, Fisher’s Hill, Tom’s Brook. and the New Market battlefields.
CAMP LETTERMAN, NEAR GETTYSBURG: Camp Letterman opened July 22, 1863. It was the first major war hospital located on a battlefield, not at a faraway city or barracks. Hundreds of tents were set up as the wards, and men from both sides filled the beds, another first. The hospital became home to more than 4,000 convalescing soldiers. Hundreds of convalescing men stayed behind in the hospital after the armies had moved on, until the last ones could be moved by train, or on their own, in January 1864. The hospital was closed that month, and for nearly a century its great significance was under-appreciated as development paved over Wolf’s farm. The site has been gradually taken over by sprawl, and even a mobile home park. In 2018, the Pennsylvania House of Representatives finally voted to honor the role Camp Letterman played in the Civil War and military medical history. A historical marker sits near Sheetz gas station No. 326.
FORT ST. PHILLIP (LA.): Founded by the Spanish in 1792, Fort St. Philip has the most fascinating history of any American fort. It was ruled by the Spanish, French, and United States, and was the location of a Civil War siege, a Civil Rights threat, and a cult. The remaining structures were severely damaged by hurricanes Katrina and Rita in 2005. Today, portions of the original masonry fort and rusty artillery remain abandoned and covered in overgrowth. The land is shrunk more and more by erosion each year. Fort St. Philip, which played such a vital role protecting New Orleans, is only accessible by boat or helicopter.
MARSHALL HOUSE (ALEXANDRIA, VA.): One of the most significant deaths in the early days of the Civil War took place not on the battlefield, but in an inn. The Marshall House at 480 King Street in Alexandria, Va., was the site of the May 24, 1861, assassination of Col. Elmer E. Ellsworth, founder of the 11th New York Volunteer Infantry Regiment and close friend of President Abraham Lincoln. It was a day that would live in infamy in the Civil War, energizing both Union and Rebel troops. The Marshall House was badly damaged in an 1873 arson, though it was rebuilt. The infamous location was demolished in 1950. But the controversy didn’t end with its removal. The Sons and Daughters of the Confederate Veterans hung a historic plaque on a new hotel on the site, The Monaco, that only mentioned Jackson, “the first martyr to the cause of Southern Independence” — not Ellsworth. The controversial sign was finally taken down in 2017 when Marriott purchased the property and renamed it The Alexandrian. MATHEW BRADY'S FIRST BATTLE OF BULL RUN PHOTOS: Perhaps the most famous lost photographs were from the early days of the war. Mathew Brady, new to his field operation, photographed the First Battle of Bull Run on July 21, 1861. One of the rare times he attempted shoot a battle in action, Brady arrived at Bull Run with a group of newspaper reporters and Union troops led by General Irvin McDowell a few days before the fighting. On July 21, he ventured onto the battlefield with a wagon and assistants. They got too close to the action, however, and when the Union soldiers retreated to Centreville, they abandoned their wagon and joined the exodus. No images of this seminal battle survive.

-- Have something to add (or correct) in this post? Email me here.