At 6 a.m. on June 10, 1865, generals James Farnsworth, Montgomery Meigs, Samuel Heintzelman, Henry Benham and Orlando Wilcox boarded a westbound train in Washington with nearly 100 other passengers. The group's final destination was the Bull Run battlefield for the  dedication of  two monuments "in memory of the Patriots" who fell in Union defeats there in July 1861 and August 1862.

At Alexandria, 100 more "excursionists" boarded the train before the party continued on through Virginia countryside devastated by a civil war that ended two months earlier.  "We watched carefully along the entire route for evidence of returning peace and prosperity in this part of the State," a New York Times correspondent wrote, "but the people will recover their wrecked fortunes slowly, for they have suffered with terrible severity."

At 8 a.m., 15 miles from Washington, the train reached Fairfax Station, the end of the line for the Orange & Alexandria Railroad. Most in the 200-person group then boarded ambulances, carriages, and army wagons provided by the military for the final, 17-mile leg of the journey to the battlefield. In a stunningly long sentence no present-day English teacher would appreciate, The Times correspondent described the scene:


"Our cavalcade, composed of some seventy-five carriages and ambulances, with a large number of equestrians, many of whom were ladies, who generally rode exceedingly well, caused quite an excitement among the inhabitants of the country, who are now at home in increased numbers, though the population is still as sparse as in some of the newest regions of the West, they were all at the roadside, and gazed with astonishment at so extensive and peaceful a demonstration."

Dedication day was a grand affair, with the usual speeches by politicians and military flourishes.  At Henry House Hill, where the monument honoring the Union fallen of the July 21, 1861, battle was dedicated, a hymn was sung to the tune of "Old Hundred." The second stanza was especially noteworthy:

After the dedication later that afternoon of the second monument, at Groveton, some went searching for battle relics. Pieces of artillery shells and broken muskets lay everywhere on the Second Bull Run battlefield. Shallow graves and human bones were found, too. "Many of the party gathered some relics from the field," The Times correspondent wrote, "while one person with eccentric taste, brought to the city part of a human skull, exhibiting the hole of a deadly bullet."

The day was also well documented photographically. At the Henry House Hill monument dedication, William Morris Smith shot a series of images. At first glance, Smith's two uncropped, glass-plate photographs in this post seem unremarkable. When we zoom in, however, fascinating details emerge. 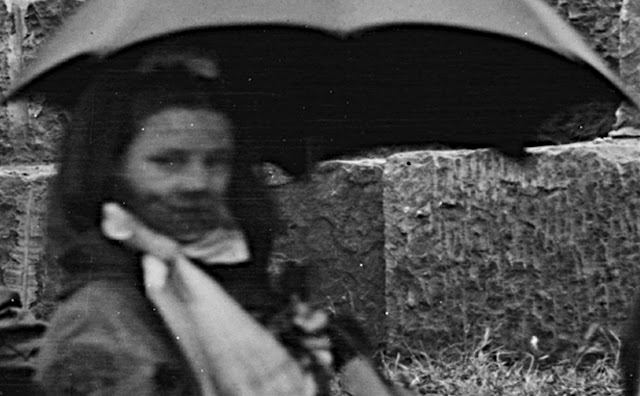 ... a young lady, her face partially covered by a veil, holds an umbrella, protection from the sun ... 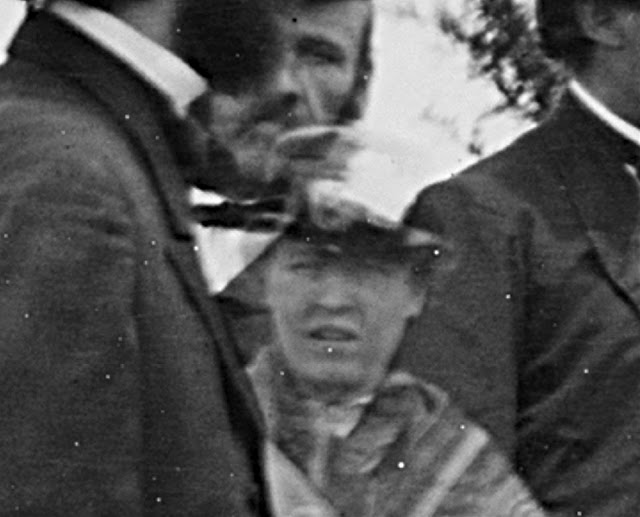 ... men tower over this woman, who stares at the photographer. She appears ghost-like, a result of the limitations of the medium. ... 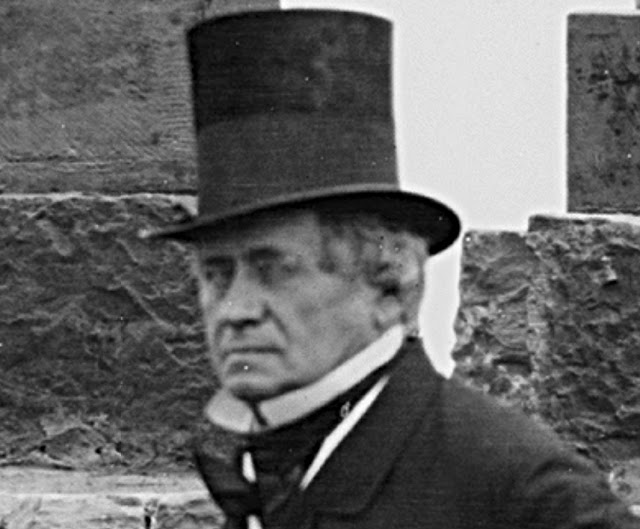 ... this ornery-looking gentleman, perhaps in in late 50s or early 60s, sports an impressive top hat ... 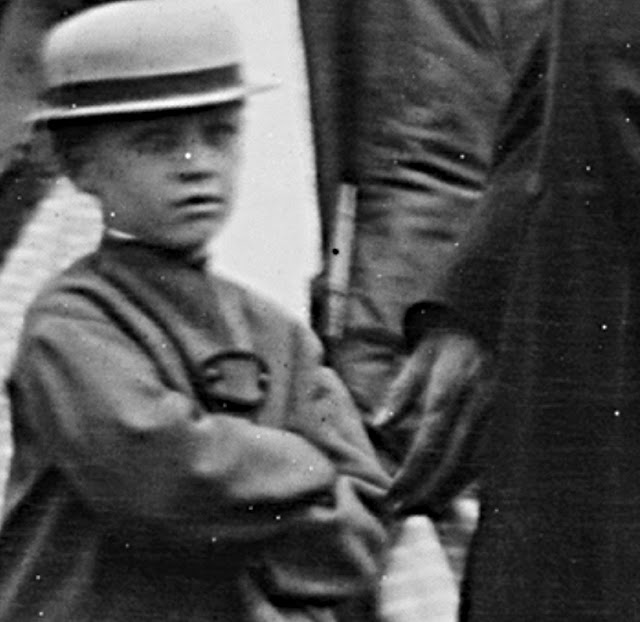 ... while this apparently unhappy lad, arms folded, shows little interest in holding the hand of the man (his father?) in front of him. Of course, he must have been pleased with that tremendous hat. ... 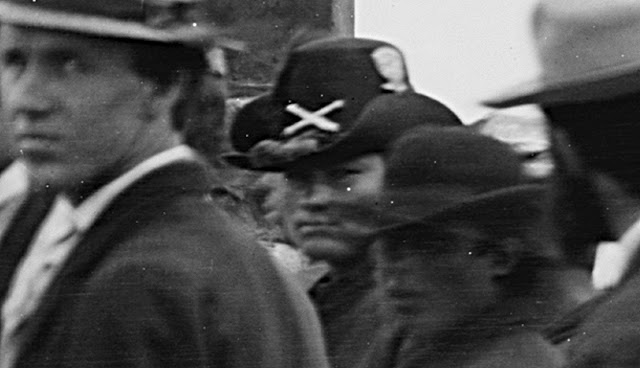 ... a youthful-looking artilleryman stands next to the wooden fence near the monument ... 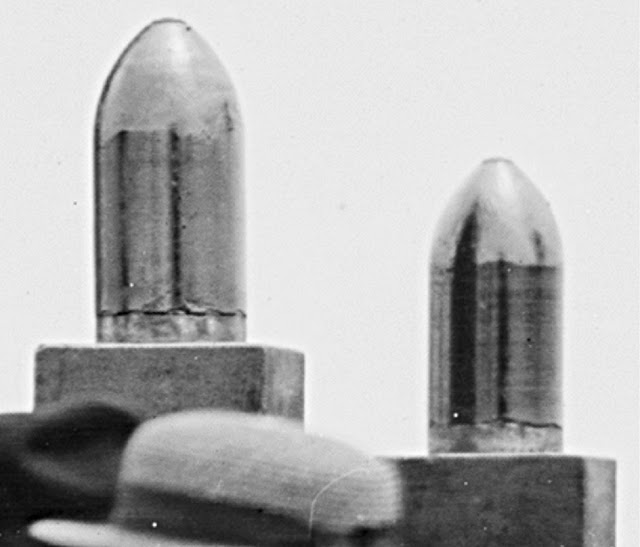 ...which includes these massive, 100-pounder artillery shells. Were they live?

(Update from Civil War photo expert John Cummings: "Those shells were found to be live when the NPS restored the monument some years ago. They have some on display in the visitor center, in the hallway leading to the bookstore. The shells that are there now on the monument are reproductions.")

PHOTO NO. 2: THE  SOLDIERS ON HENRY HOUSE HILL


Union soldiers pose in front of the Bull Run monument on Henry House Hill in the uncropped version ... 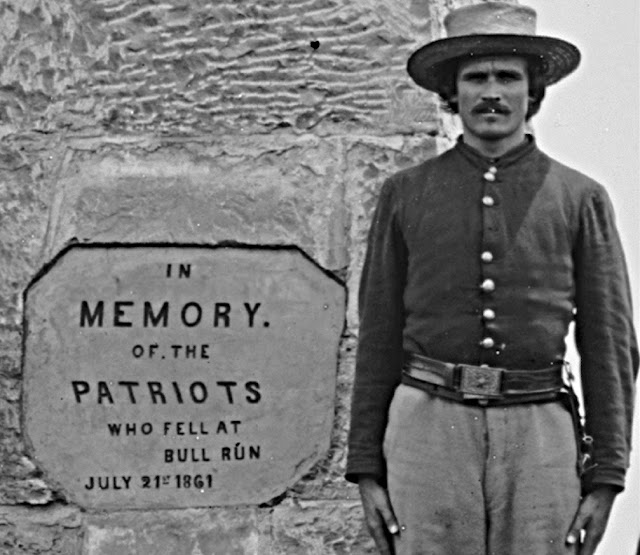 ... zooming into the original photo, we see a soldier standing ramrod straight and the inscription on the simple, red sandstone monument. It stands today yards from the rebuilt Henry House that was destroyed during the Civil War ... 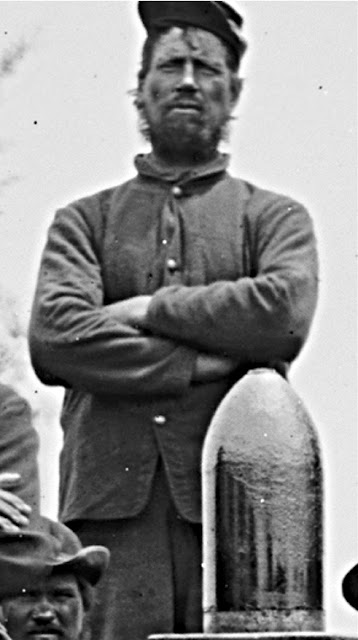 ... arms folded almost defiantly, this soldier stands atop the mound of dirt next to the 27-foot monument. And there's another one of those imposing artillery shells ... 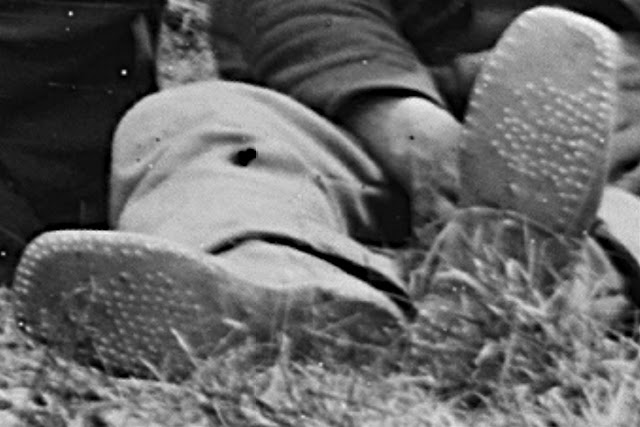 ... the detail is so impressive in the glass-plate image that we can easily see the hobnails on the leather, brogan-style shoes of this soldier, who's seated on the ground near the bottom right in the original photograph. These shoes were often fitted with metal in the heels to reduce wear ... 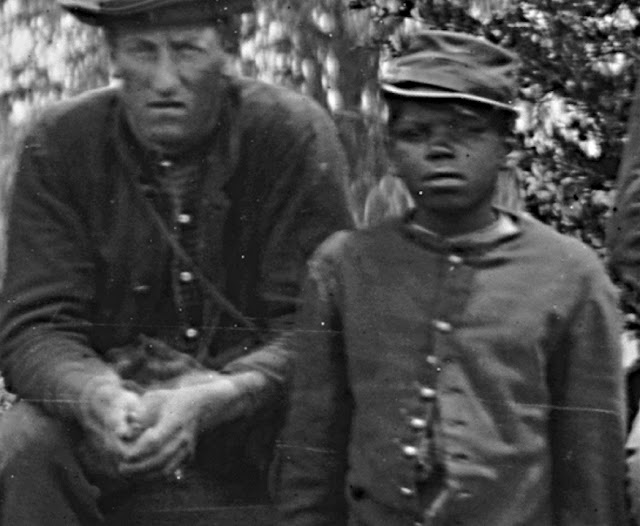 ... did this black youth, dressed in military uniform, serve as a soldier, too? 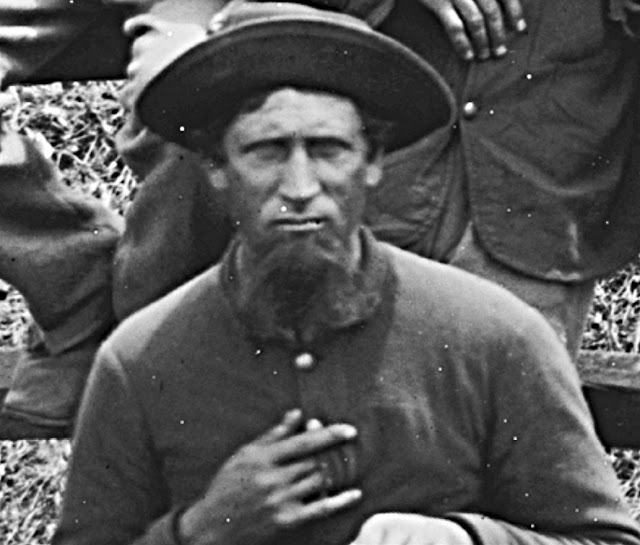 ... a 19th-century gang sign? Missing tips of  his digits because of a war wound? More likely this soldier merely has his fingers partly tucked inside his blouse ... 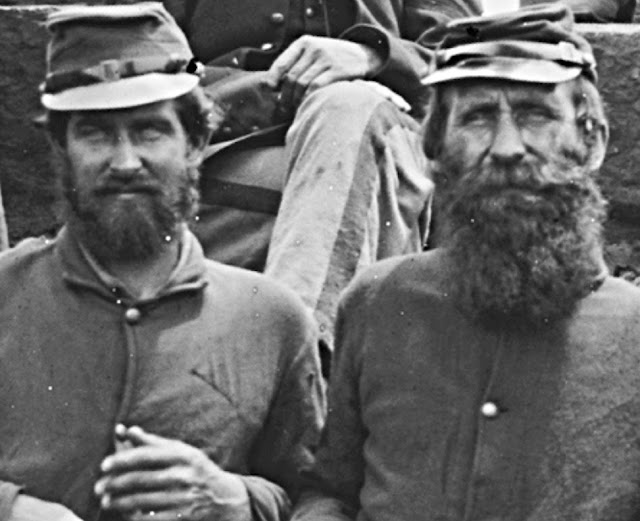 ... were these bushy faced soldiers father and son? Gotta love these mugs.

What else do you see? E-mail me or add your comments to the post below or on my Civil War Facebook page. Find high-resolution versions of the original photographs in this post on the excellent Library of Congress web site here and here.