"What in hell are you doing here?" a Union officer shouted at the men as the Battle of Mill Springs swirled on Jan. 19, 1862. "Why are you not at the stretchers bringing in the wounded?"

"This is Zollicoffer," one of them replied.

"I know that," the officer said. "He is dead and could not be sent to hell by a better man, for Col. Fry shot him; leave him and go to your work."

Earlier that misty, cold morning, Zollicoffer -- a former Tennessee congressman and newspaper editor from Nashville -- had mistakenly ridden into Union lines. After a volley or two, Zollicoffer fell dead from his horse, shot through the chest. Federal Colonel Speed Smith Fry may have fired the fatal bullet into the 49-year-old commander, derisively called "Snollegoster" and an "old he-devil" by the Yankees.

Sadly, even in death, Zollicoffer was targeted.

Days after the battle, a New York newspaper correspondent spotted the general's body in front of the tent of the 10th Kentucky sutler, wrapped in a blanket. Zollicoffer's skin was "beautifully white and clear," the reporter noted, and his face had a "pleasant expression," which "grim in death was not altogether destroyed." Zollicoffer had shaved off his beard, "probably in order to be less easily recognized," the correspondent speculated.

But "Old Zolly" was stripped by souvenir hunters of his clothes, from the rubber coat over his uniform to his shirt, undershirt and socks. Three buttons were snipped from his coat by an Ohio private. Even Zollicoffer's hair was cut off close to the skull by fiends.

PANORAMA: The death site of General Felix Zollicover is marked by the monument.
(Click icon at right for full-screen experience.)
"l am sorry to say that his remains were outrageously treated by the thousands of soldiers and citizens that flocked to see them." wrote the New York reporter, probably exaggerating the number of ghouls. (This theft from a fallen officer was not unique: While Union General John Sedgwick's body lay at an embalmer in Washington, "a lady exhibited a singular pertinacity," a newspaper reported, "to procure a memento of the fallen hero by clipping two buttons from his coat.")

The New York newspaper correspondent's report of the ill-treatment of Zollicoffer remains was denied vehemently by some, but the evidence is irrefutable. "I have a small piece of Zollicoffer's undershirt," a Federal soldier bragged, "and a daguerreotype of a secession lady, taken with a lot of other plunder." An Ohio newspaper reported a Union officer showing off a piece of the general's buckskin shirt: "It was very soft, and must have been exceedingly comfortable if kept dry."

A week after the battle, 31st Ohio Captain John W. Free wrote that Zollicoffer's clothes were divided by soldiers as trophies -- "until orders were imperatively given not to do so any more.

"But his pants and the fine buckskin shirt is no doubt scatered all over the different States of the North," the officer added, "as some 4 or 5 different states were here represented."

Another Ohioan confirmed Free's account. "When the soldiers saw Zollicoffer’s corpse," wrote Private John Boss of the 9th Ohio, "they tore his clothing from his body, and split up his shirt, in order to have a souvenir. A Tennessean wanted his whole scalp, but was prevented from that because a guard was placed there."

In a letter to a friend, 9th Ohio quartermaster sergeant Joseph Graeff wrote of Zollicoffer: "Inclosed you will find a lock of his hair and a piece cut from his pantaloons. Shortly after the battle I hunted for his corpse, and found it lying in the mud."

Union authorities eventually put a stop to the macabre nonsense, and Zollicoffer's mud-spattered body was washed and placed in a tent under guard. "Having no clothing suitable in which to dress him," a witness recalled, "he was wrapped in a nice-new blanket until they could be procured, after which he was dressed and provided for in a handsome manner. ... Particular regard and unusual respect were shown his body by officers and men."

Chaplain Lemuel F. Drake of the 31st Ohio viewed the general's remains on a board in the tent. "I saw the place where he was shot, and laid my hand upon his broad forehead," he wrote. "He was about six feet tall, and compactly and well built, one of the finest heads I ever saw."

Days after the battle, Zollicoffer's body was embalmed by a Union Army surgeon in Somerset, Ky., placed in a metallic coffin, and handed over by the Federals to the Confederates under a flag of truce. Back in his native Tennessee, the remains of one of Nashville's leading citizens were treated reverently.

On Feb. 1, the general's body arrived in Nashville, where, despite rainy, "exceedingly disagreeable weather," thousands filed past the remains at the State Capitol Building. The next day, the procession to Zollicoffer's grave site at Nashville City Cemetery, a little more than a mile away, was "one of the largest ever seen" in the city.

"First in the fight," reads the inscription on a marker next to Zollicoffer's gravestone. "and first in the arms of the white winged angel of glory, with his hero heart at the feet of God and his wounds to tell the story." 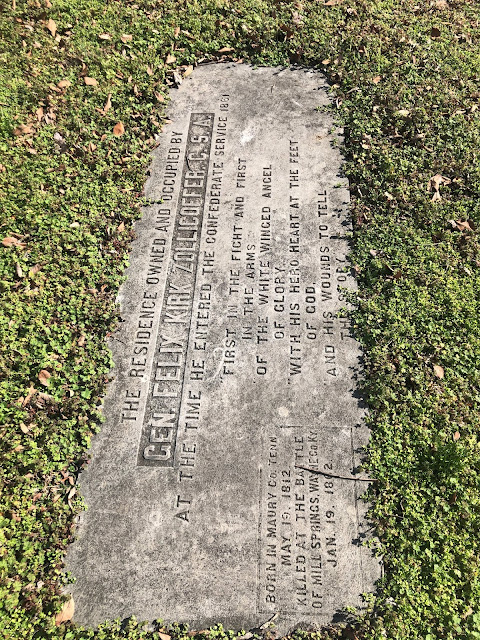