Exploring photo of soldiers' graves at Rebel prison in Richmond

Like this blog on Facebook | Follow me on Twitter
On April 8, 1865, days after the fall of Richmond, Alexander Gardner captured scenes on Belle Isle, a Union prisoner of war camp in the James River from 1862-65. The Gardner photograph at the top of the post is especially poignant: Heaps of earth and crude, wooden headboards denote the final resting places of dozens of soldiers.

Belle Isle POWs lived in tents or without any shelter at all because there were no barracks or other buildings to house them. At one point, 10,000 Federals were held on the 54-acre island.  Sanitary conditions were primitive, according to 39th Massachusetts Corporal Thomas Bean, who was imprisoned at Belle Isle in 1864, In a post-war letter, he described the brutal conditions:


"The water in the river at this time was about two feet deep. This was the privy, as also the only place where we were allowed to get any water, to either drink or wash with...the river was full of filth from houses and mills above...one of the men from my Regt got crowded off into the ditch and the guard shot him dead....About the fourth week of our stay here, the sick men were taken out and sent down the river and exchanged...no man that was able to fight, was allowed to go, for they could destroy them here faster than they could in the field." 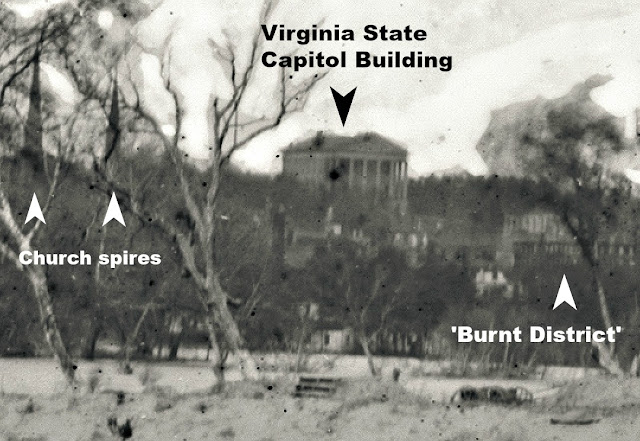 Remarkable details appear in an enlargement of the original, glass-plate image, available to view in digitized formats on the excellent Library of Congress web site. Easily seen in the background is the Virginia State Capitol building, which served as home for the Congress of the Confederate States of America and where Robert E. Lee assumed command of the state's forces on April 23, 1861. Near the Capitol Building appear the spires of two churches as well as a portion of the "Burnt District," skeletons of buildings that were destroyed when a fire set by retreating Confederates blazed out of control. ... 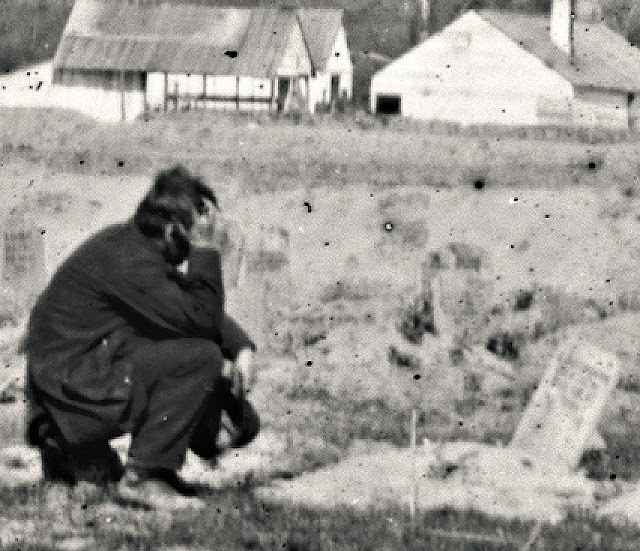 ... and then there is this haunting scene. It's a cropped enlargement of the original image and probably Gardner's prime subject: a man with his head in his hand, kneeling at a soldier's grave. Does he mourn for a comrade ... or a close friend ... or his brother? Gardner, who was not above staging photographs, may have posed the "mourning" man. (See these Gettysburg images.)

The names on most of the graves are tantalizingly out of focus even in the highest-resolution TIFF image on the LOC web site, An examination of the original glass negative at the Library of Congress in Washington might be more revealing.

A cropped enlargement (above) of the foreground of the original image is especially interesting.
From left, the last names on the headboards are Burns, Hoffman and Wolf.
Quick research indicates these soldiers are most likely 1st Kentucky Private John Burns, 11th New Jersey Private William Hoffman and 1st Tennessee Private P. Wolf. Hoffman died of scurvy and diarrhea at Belle Isle in the spring of 1864, and Burns died from starvation and inflammation of the lungs in late winter of the same year; Wolf, whose first name is unknown, died of unknown causes on Jan. 5, 1864.

After the war, burial crews disinterred these soldiers and re-buried them at Richmond National Cemetery, about three miles east of the city.
Marked by pearl-white, government-issued tombstones, Burns, Hoffman and Wolf remain there today. Unfortunately, the remains of the majority of  Union soldiers re-buried at the national cemetery are unknown, despite the efforts of comrades such as Briscoe Goodheart, who noted in the Nov. 10, 1892, edition of  The National Tribune, a veterans newspaper:


"When a prisoner would die we would always give his name, company, and regiment to the Confederates, who would write it out on a piece of paper and pin or stick it in a buttonhole, or lay it on the body, but when as many as 200 at a time would lay out in the rain and snow for two weeks, before burial, nearly all the names would be blown away or lost. Hence so many unknown." 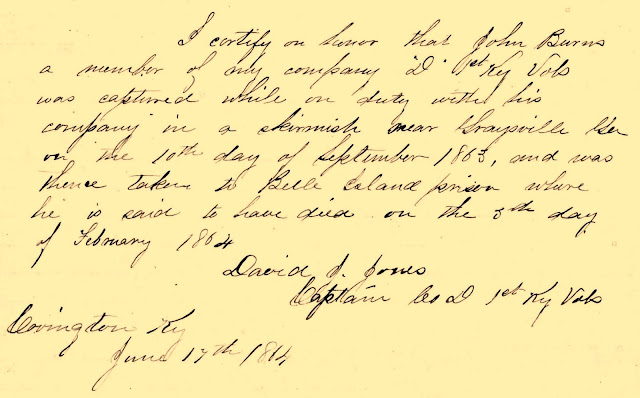 Of the three identified Belle Isle graves, information was most readily available on Burns, who was unmarried and in his late teens or early 20s in 1864.
On July 8, 1861, John enlisted as a private in the 1st Kentucky Volunteers, a three-year regiment, at Camp Dennison, Ohio. Mainly composed of men from the Buckeye State, the regiment saw hard fighting on April 7, 1862, at Shiloh, where John apparently escaped unscathed physically.

Shortly after his death, his mother filed for a "widow's" pension. Documents from that file are in the National Archives in Washington, and digitized versions are available on fold3.com.
An enlargement of Burns' headboard image (above) shows a date of death -- Feb. 5, 1864 -- that matches the death date in an affidavit (second image above) from David Jones, the captain of the fallen private's Company D in the 1st Kentucky.
Burns, Jones noted, "was captured while on duty during a skirmish near Graysville, Ga.," on Sept. 10, 1863, during the Chickamauga Campaign and sent to Belle Isle. 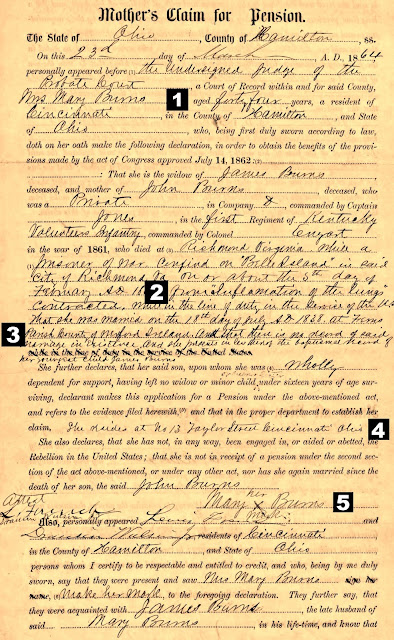 Other documents found in Burns' pension file reveal more details about John's short life. His 44-year-old mother, an Irish immigrant named Mary, filed for the pension on March 23, 1864. The claim document (above) includes her age (1), cause of her son's death (2), date she was married in Ireland (3) and address where she lived in Cincinnati (4). One can only imagine the thoughts that went through the grieving mother's mind when she signed the bottom of the document (5), perhaps by merely writing an "X."

In poor health when her son joined the army, Mary was "wholly" dependent on John, who regularly sent home to Cincinnati his army wages for her rent payments and other support. She had been a widow since July 1859, when her husband James died.
After John's capture, Mary's rent went unpaid "for awhile," according to an acquaintance, and she received aid from a fund that helped the families of soldiers. Mrs. Burns had "three or four children," but they were too small to help her much after John's death. 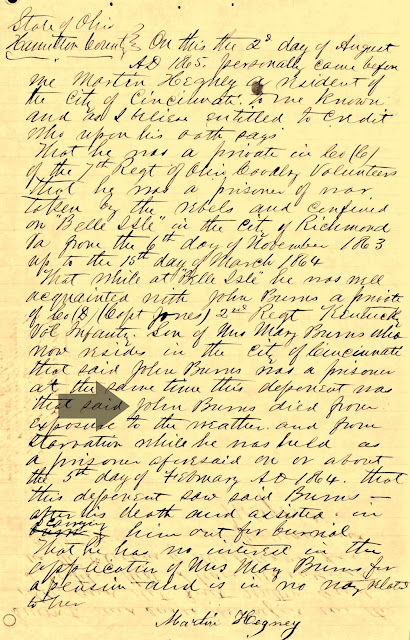 A private in the 7th Ohio Cavalry, Martin Hegney was imprisoned at Belle Isle with Burns, with whom he was "well-acquainted." According this Hegney affidavit, dated Aug. 2, 1865, Burns died from "exposure to the weather and from starvation." Hegney assisted in carrying Burns to his temporary grave at Belle Isle, where his name appeared on a wooden headboard photographed 14 months later by Gardner, the renowned Civil War photographer.

Shortly after attorney Horatio King filed Mary Burns' pension claim, it was approved. The widow initially received $8 a month from the government, a pittance for the sacrifice she and her son made for their country.

No image of John Burns is known to exist.


Have more info on these images or the soldiers in this post? E-mail me here.