During my terrific visit to Antietam three weeks ago, Richard Clem shared relic hunting tales with a group of Connecticut Civil War roundtable members and blogger John Rogers outside the Visitors' Center.

Like a charismatic Southern preacher ministering to his flock, the longtime Hagerstown, Md. resident kept us entranced.

In four decades of relic hunting in Maryland, Virginia and West Virginia, Clem and his brother have dug 30,000 bullets -- or approximately 29,999 more than I have -- and enough other Civil War treasure to fill a small museum or two. (Clem sold 15,000 of those bullets for a buck apiece to a New York man, who may have had a lot of explaining to do to his wife.)

Clem's greatest find is this thin silver identification badge, a little bigger than a quarter, that belonged to Consider Heath Willett. A sergeant in the 44th New York, Willett helped rescue Confederate soldiers caught in a crossfire near Little Round Top during the Battle of Gettysburg. Clem uncovered the once-in-a-lifetime find while relic hunting near Lappans Crossroads, several miles from the Antietam battlefield, the day after Thanksgiving 1986. 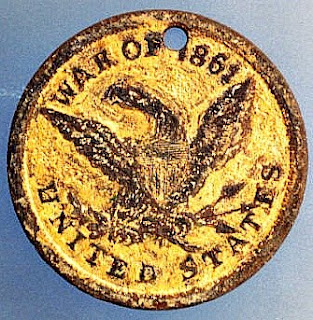 Many of Clem's finds have come at Antietam or the immediate vicinity, before much of the battlefield became National Park Service property. He once eyeballed a Union eagle button and unearthed 90 bullets in "The Cornfield" and found shoulder scales near the Philip Pry Farm, which was General George McClellan's headquarters. ("I heard the officers took them off because they made good targets for sharpshooters," Clem told me.)  Most of the bigger items, Clem said, were dug up from the battlefield in the 1920s.

Part historian,  part detective and part bulldog, Clem documents many of his finds and writes about some of them for newspapers, magazines or whatever publication is interested in a really good Civil War story.

And Clem, a 72-year-old retired woodworker, certainly knows how to craft a good tale. (Check out his Antietam stories on a "hospital of horrors" and farmer William Roulette.)

Five years after the Willett discovery, Clem found another identification badge while relic hunting -- this one with a direct connection to the Battle of Antietam. The brass tag, about the size and thickness of a quarter, belonged to a 21-year-old soldier from New York who served in the 2nd Vermont. That young soldier, William Heath Secor,  became a research project-turned-obsession for Clem for nearly a year.

In an excellent article he wrote for the Washington Times in 2006, Clem recounted the day of discovery:


"On a beautiful autumn afternoon -- Oct. 18, 1991-- my brother Don and I were pushing our metal detectors over a cedar-covered ridge just north of the Antietam Battlefield. In the shadow of a huge tree, the detector sounded the first good signal of the day. Digging to a depth of 5 inches, I removed a small round piece of brass about the size of a quarter. Rubbing off some of the dirt, I saw a hole on the edge of the token.

"After the new find soaked all night in a strong solution of household cleaner to remove some of the corrosion, faint gold letters slowly came into focus: “Corp. Wm Secor / Halfmoon, N.Y. / Co. A / 2nd Reg. / Vt. Vol.” The reverse bore an eagle emblem with the legend: “War of 1861 / United States.

"During the Civil War years, before official Army dog tags, these patriotic keepsakes were sold to soldiers by enterprising sutlers. The sutler, using a small hammer and a series of lettered dies, would stamp the soldier’s name, regiment, hometown, etc., into the gold-plated brass disc. Normally paying about 25 cents per pair, the soldier would retain one tag and send the other home to family or a loved one. As any veteran relic hunter will confirm, when it comes to metal-detecting for Civil War artifacts, anything personally ID’d is the ultimate discovery."

Secor was mortally wounded during the Second Corps' attack near Bloody Lane and transported about two miles north of the battlefield, to the O.J. Smith farm. Barns and houses on many farms in the area were used as field hospitals during and after the battle. According to a letter Clem discovered, Secor died the day after the battle and was buried on Smith's property, near the barn.

"It becomes my painful duty to inform you of the death of Corporal William Secor, Co. A. Vt. Vols," Lieutenant E.O. Cole wrote to Secor's stepfather in a letter dated Sept. 28, 1862. "He was wounded in the battle of Antietam on the 17th and died on the 18th day of September. He was buried on the Smith farm near Sharpsburg. At the time he was wounded he was carrying the Colors of his Regt. Which position he had occupied for some time. He had many friends in his Regt. I saw the Chaplain that was with him in his last hours, and he said that it might be of consolation to his friends to know that he lived with a hope in Christ and was resigned to his fate.

"As a soldier, there was none better."

Sometime after the battle, Secor's body was disinterred and shipped back to New York, where his remains were laid to rest in Baptist Church Cemetery in Halfmoon. Nearly 130 years later, a relic hunter discovered his brass ID near the site of what once was an old barn and amazingly pieced together his tale. 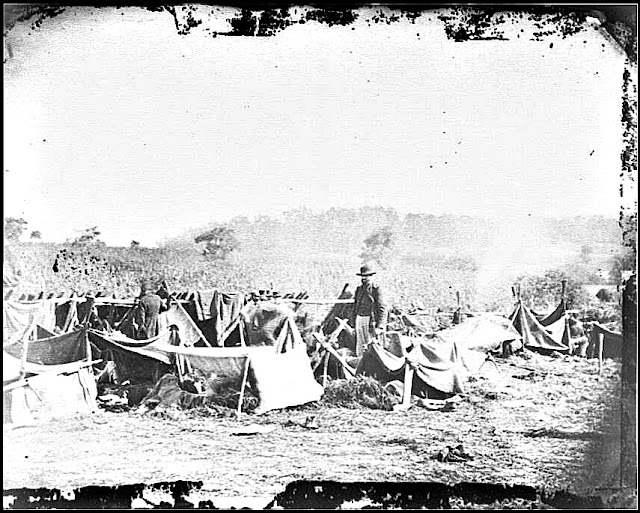