Then & Now: Where Lee accepted command in Richmond

When the Rebels evacuated Richmond in early April 1865, fires deliberately set in the warehouse district to keep supplies out of Union hands raged out of control. Many structures were destroyed near the Virginia State Capitol building (see here, here and here), which thankfully survived and became a prime subject for Northern photographers.

The building has a rich history. Completed about 1792, it was designed by Thomas Jefferson and after Richmond became the Rebel capital on May 30, 1861, it became home for the Congress of the Confederate States of America. It was also here that on April 23, 1861, Robert E. Lee accepted command of the state forces of Virginia. (He took command of the Army of Northern Virginia on June 1, 1862.)

An enlargement of the original "Then" image,  probably taken in the spring of 1865, reveals a man in a top hat who appears to be famed Civil War photographer Mathew Brady, an indication one of his men, probably E.G. Fowx, created the photo. Brady also apparently appears in an enlargement of this Richmond image of Jefferson Davis' executive mansion, the White House of the Confederacy. Another enlargement of the 1865 State Capitol building image reveals Union soldiers on the portico and several broken window panes, perhaps the work of vandals who took advantage of the chaos after the Rebel government abandoned the city.

A cropped version of this Google Street View shot, the "Now" image shows the State Capitol building looks much as it did during the Civil War. For all my Then & Now images, created using the excellent Juxtapose tool, click here. 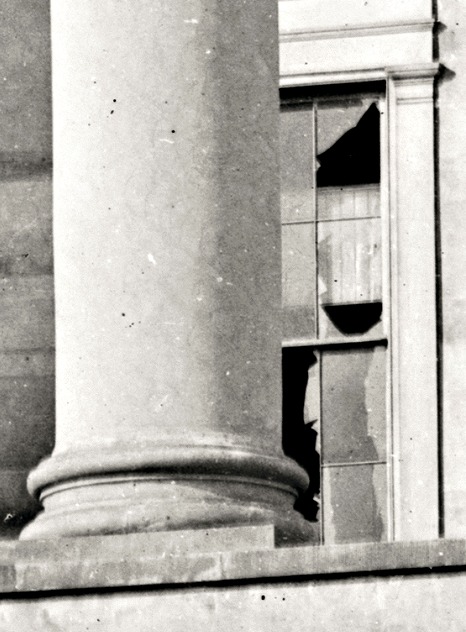