American graffiti: What soldiers left behind in Brandy Station

From the outside, the circa-1858, two-story frame building beside train tracks in Brandy Station, Va., looks unremarkable. But on the walls inside, you'll find treasure: charcoal and pencil drawings and signatures left by soldiers from both armies during the Civil War. Even one of the South's most famous generals may have left his name on the walls of  Graffiti House.

Known mostly for the huge cavalry battle on June 9, 1863, Brandy Station was a strategic location and a junction of the Orange and Alexandria Railroad during the Civil War. In the weeks after the First Battle of Bull Run on July 21, 1861, Confederate casualties who were evacuated by train were probably treated at Graffiti House, and it also may have been used as a hospital following the great cavalry battle that took place in fields near the building.

Signatures from soldiers who fought at Brandy Station appear on walls in three rooms on the second floor, where nearly all of the remaining Civil War-era graffiti in the building appears today. In 1863-64, Brandy Station was site of a winter encampment by the Union army, which used Graffiti House as a headquarters.

En route to visit Cedar Mountain battlefield in early April, I stopped by Graffiti House, a short distance off U.S. Route 15/29. The museum was closed, but it didn't take much convincing to gain access. Brandy Station Foundation member Joe McKinney answered my call to the number on the sign on the museum door, and within 10 minutes, he arrived in his black pickup to conduct a 90-minute tour for me and a couple from Virginia.

The building, McKinney explained, has changed hands numerous times since the Civil War, serving as an antiques shop and an office for a period of time. The foundation acquired the once-derelict structure in 2002 for $98,000. Graffiti was discovered during a renovation in the early '90s, when old wallpaper was removed, and further investigation in 2013 revealed even more in a crawl space under stairs and what is now the first -floor bathroom. ... 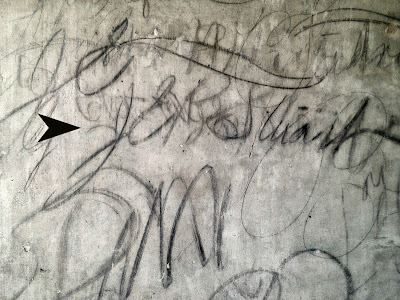 ... this may be the signature of Confederate cavalry commander Jeb Stuart himself. More than 30 signatures of soldiers, mostly Rebels, have been identified by the Brandy Station Foundation. The signature above, McKinney said, compares favorably to other signatures during the war from the Rebel general, whose horse soldiers were so surprised by Union cavalry at Brandy Station that the Richmond Examiner derided them as "puffed up cavalry." ...

... Allen Bowman, whose signature appears above, was a sergeant in Company E of the 12th Virginia Cavalry. Thirty years old at the Battle of Brandy Station, he died at age 76 in 1911. His lonely final resting place is at the edge of  the woods in rural Mauertown, Va. ... 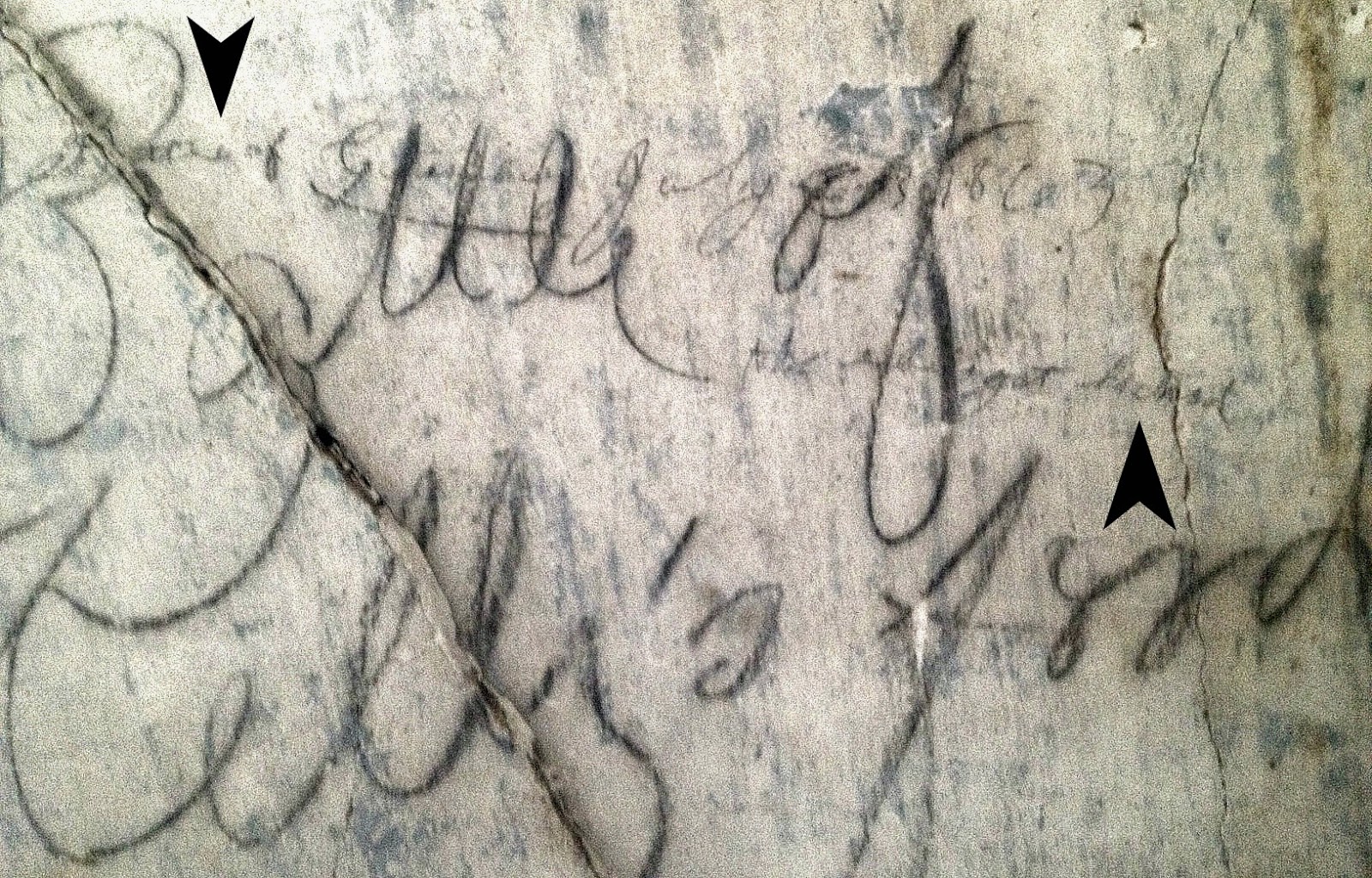 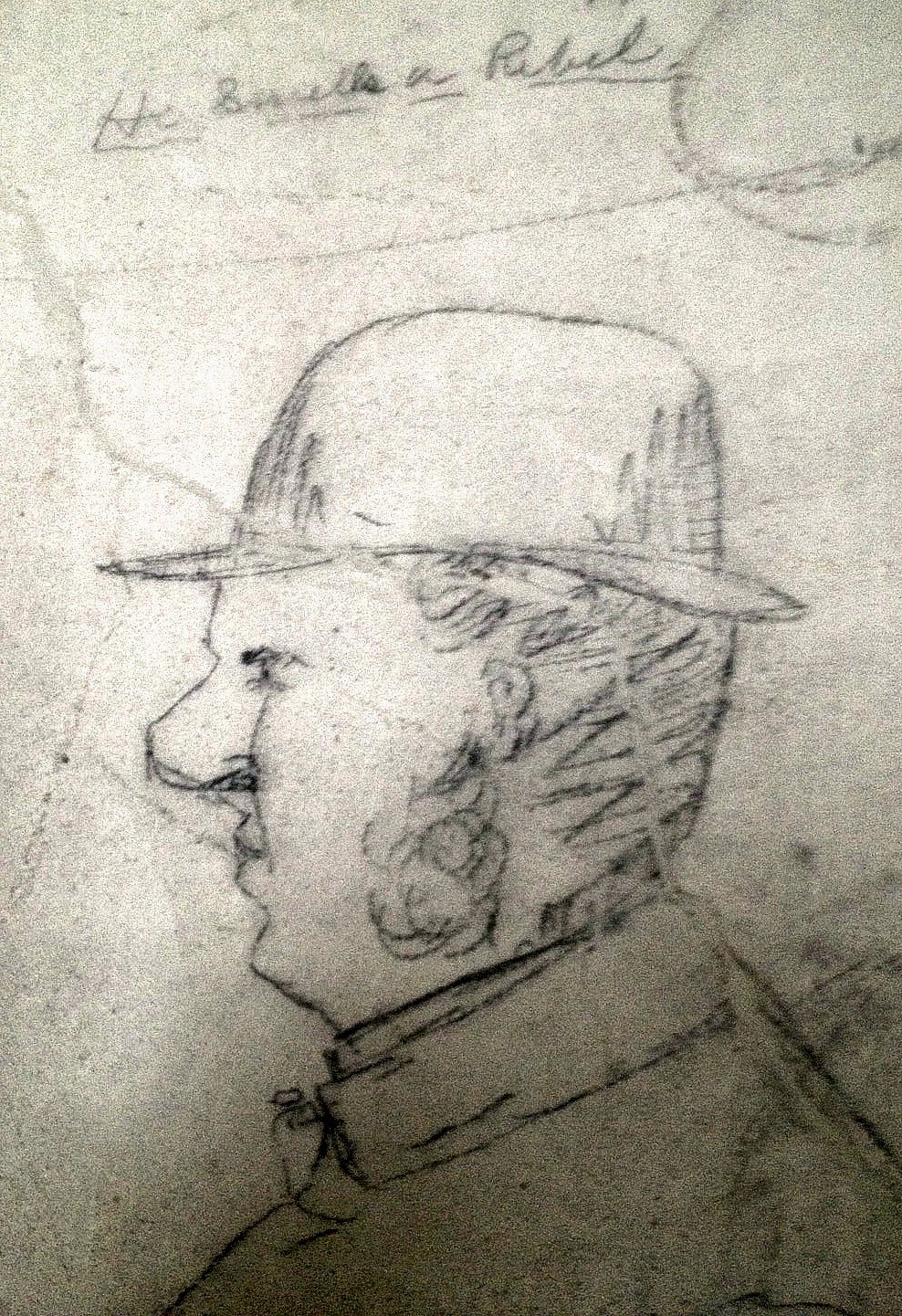 ... this man in a bowler was probably drawn by a Union soldier, who added the thought bubble at top that reads, "He smells a rebel." Out of the photograph to the immediate left is the rear end of a horse. ... 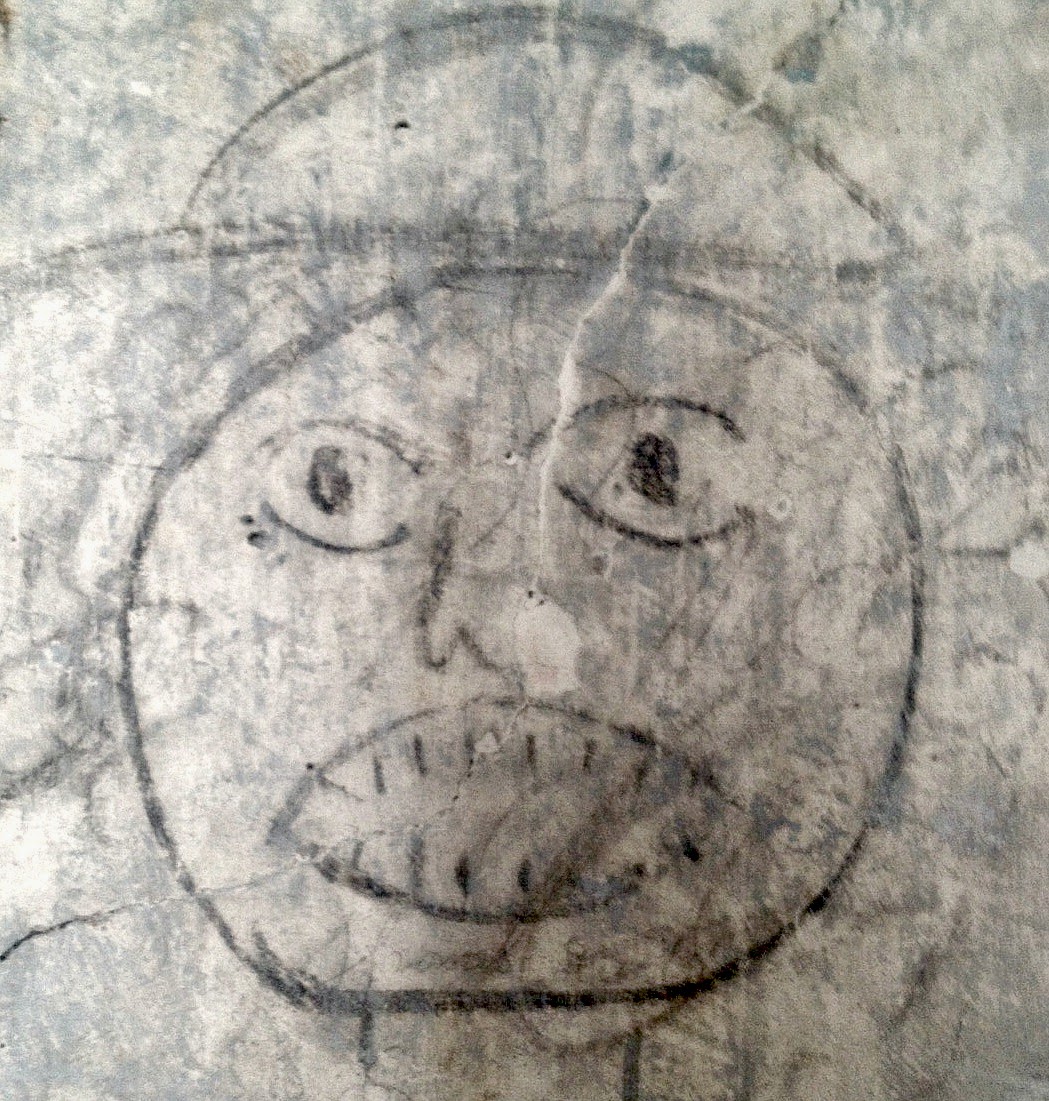 ... just like today, some 1860s graffiti artists were more talented than others. The creator of this happy face apparently was artistically challenged or perhaps enjoyed a little too much whiskey -- or both ... 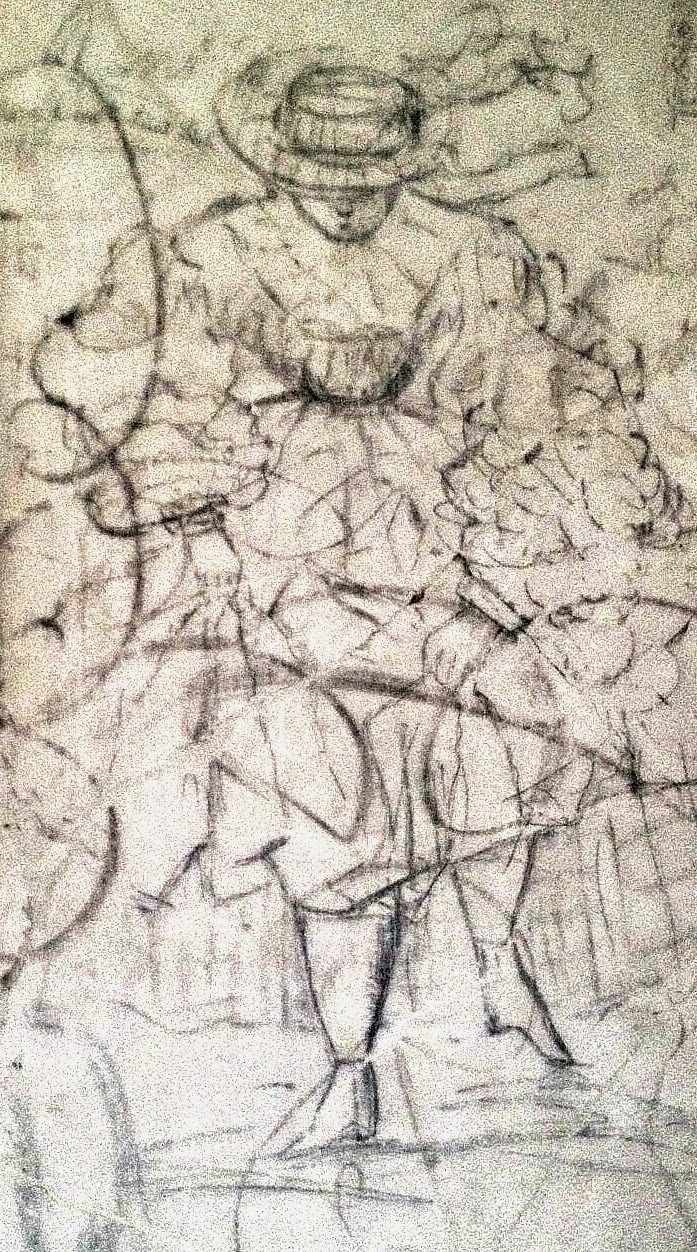 ... the wives of officers sometimes followed their husbands to camp. This illustration is of a finely dressed woman, who appears to be deftly stepping through mud.  ...

... in one of the coolest features I have seen in a museum, the present meets the past. Graffiti House allows descendants of Civil War soldiers to write their names on a wall on the first floor. Descendants of Robert E. Lee and Jeb Stuart did the honors here ... 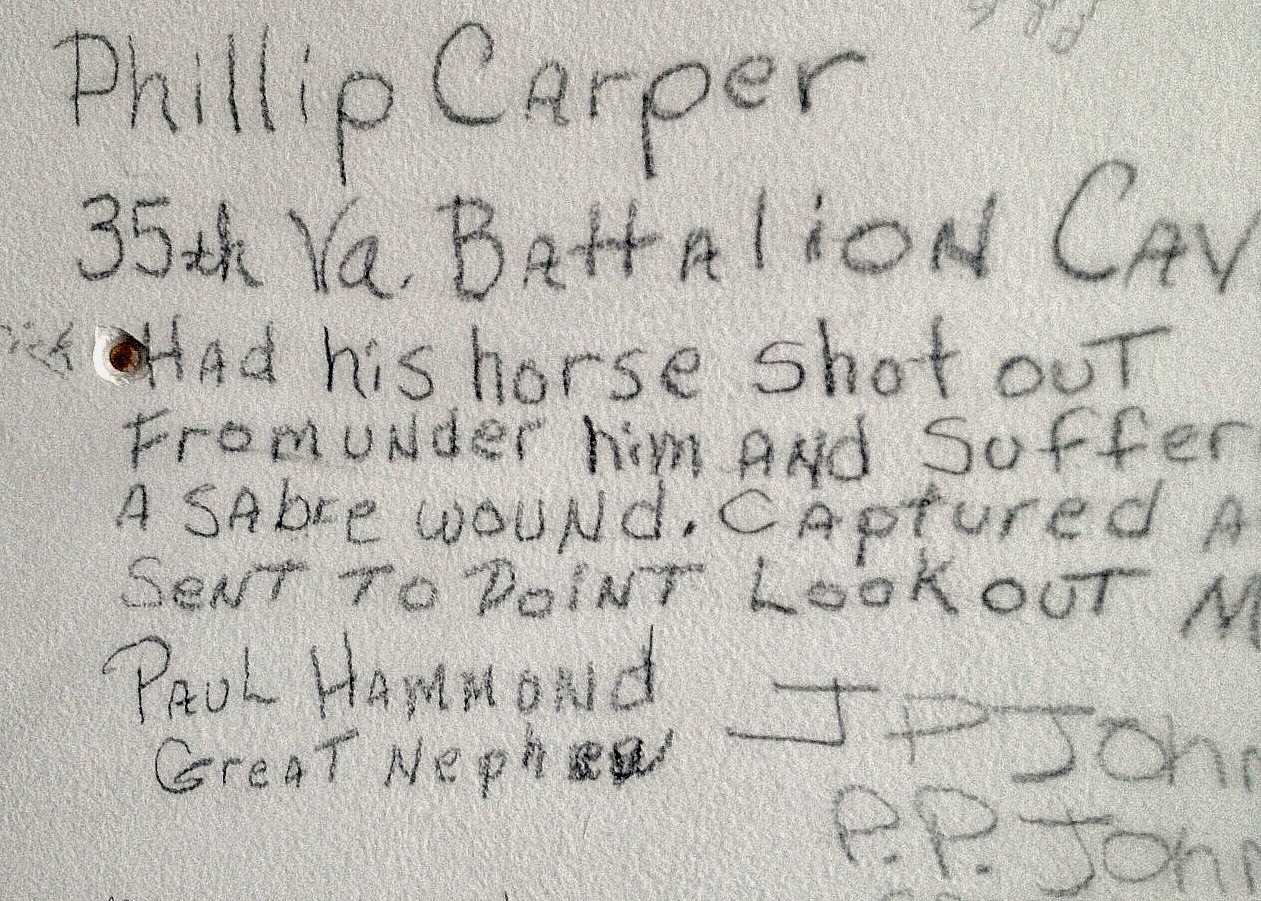 ... while the great nephew of Phillip Carper (below), a private in the 35th Virginia Cavalry Battalion, printed his name and provided a snippet of the story of his ancestor. From White Post, Va., Carper was 22 years old when he enlisted in the Rebel army on Dec. 17, 1862. His $800 horse was shot and killed during the Battle of Brandy Station, but that was the least of Carper's concerns. He suffered saber cuts in the head, left hand and right arm during the largest cavalry battle ever in North America, was captured and then sent to a Yankee hospital in Alexandria, Va. He recovered from his wounds and eventually was paroled, but Carper was captured again at Sugarland Run, Va, in in December 1863 and was imprisoned for nearly two months before he was exchanged.

Carper, who died in 1918 at age 77, undoubtedly would have been pleased that his descendant remembered him at Graffiti House, a short distance from where he was slashed by a Yankee in the summer of 1863.