Every so often, you see a old photo that makes you go, "Whoa, that's a terrific piece of history." This circa-1900 albumen of the old Chancellorsville House on historic Orange Turnpike certainly qualifies. The rare image is owned by Pat Sullivan, a Spotsylvania County native who regularly posts stories about his Virginia ancestors, several of whom fought for the Confederacy, on his excellent Spotsylvania Memory blog. (Pat's post on the Spotsylvania County he remembers while growing up there is well worth your time.)

The large house in the image, of course, is not the original Chancellorsville Inn, which Joseph Hooker used as his headquarters during the massive, and embarrassing, Union defeat at the Battle of Chancellorsville on May 1-3, 1863. The image instead shows the house that was built on the same site after the war and was destroyed in 1927 by a fire that may have started at an upstairs flue. During the battle, Union troops deployed in the field behind the snake rail fence in the image ... 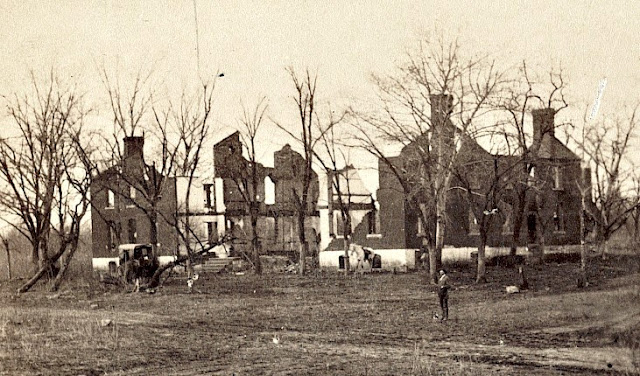 Ruins of the original Georgian-style house, struck repeatedly by Rebel fire and destroyed during the battle, are shown above in an 1865 image in the Library of Congress collection. The original building, seen in the illustration above that's also in the LOC collection, was completed in 1816 and served as an inn and later as an especially large private residence. As the fighting swirled about her property during the battle, widow Frances Chancellor, her children and extended family sought refuge in the basement.

They had unwelcome company.

"The fighting was awful, and the frightened (Yankees) crowded into the basement for protection from the deadly fire of the Confederates," recalled Susan Chancellor, one of Frances' daughters, "but an officer came and ordered them out, commanding them not to intrude upon the terror-stricken women." Later, the same officer ventured into the basement to tell Frances Chancellor that her house, the target of Rebel artillery, was on fire.

"Cannon were booming and missiles of death were flying in every direction as this terrified band of women and children came stumbling out of the cellar," remembered Susan, 14 at the time of the battle. "If anybody thinks that a battle is an orderly attack of rows of men, I can tell them differently, for I have been there."

In the early 20th century, Susan Chancellor would often stop by for unannounced visits to the re-built house, much to the chagrin of a young girl who lived there with her family. "It was odd that she never knocked," 89-year-old Hallie Rowley Sale told the Fredericksburg Free-Lance Star in 2003. "It was like she still thought of it as her home. We would hear a door open. And the next thing we knew, Mrs. Chancellor would be leading a group of people through the house."  (Here's a transcript of a fascinating 2003 interview of Sale by the Spotsylvania Preservation Foundation. She died in 2006 at age 91.) 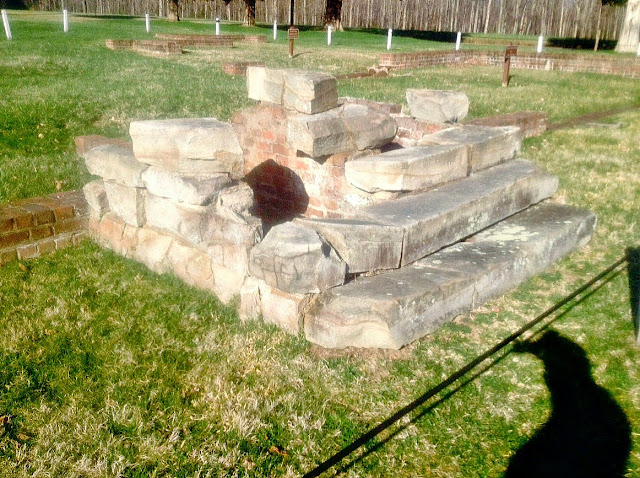 Observing the battle from the second-floor porch of the house, Hooker was famously knocked senseless when an artillery shell crashed into the pillar he was leaning against, showering the general with splinters and chunks of wood. An unexploded rifled shell was discovered under these steps (above) of the Chancellorsville Inn during an archaeological dig in 1973, leading some to speculate it was the one that KO'd Hooker, who returned to the site in October 1876 for a veterans reunion. The artillery shell is now in the Chancellorsville National Battlefield visitors center. 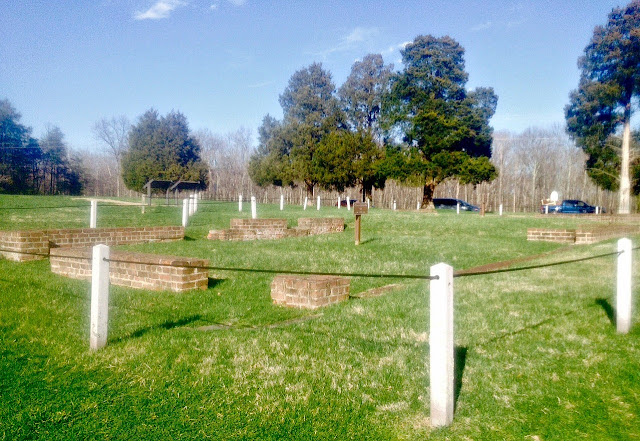 Only a brick outline remains today from the original building, which once was described as "one of the most celebrated houses in Virginia." 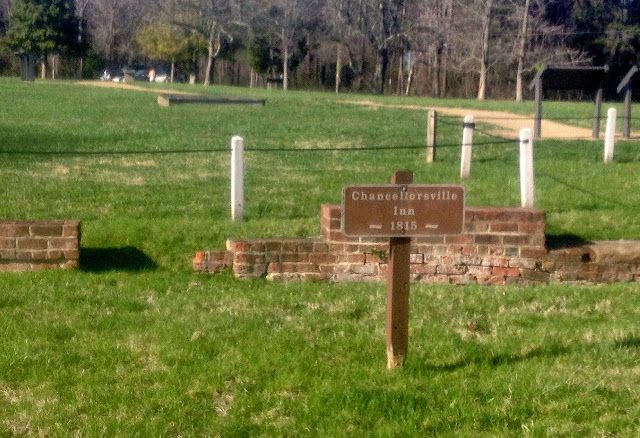