Hallowed ground to housing: A visit to Stones River battlefield 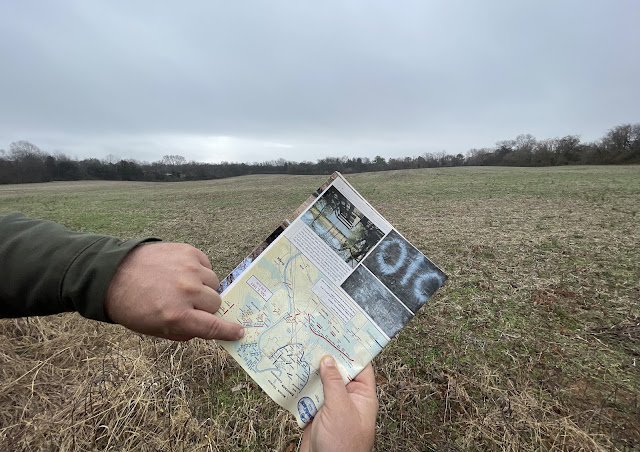 Like this blog on Facebook | Follow me on Twitter
The National Park Service oversees roughly 700 acres at the Stones River (Tenn.) National Battlefield, a small fraction of the ground where 25,000 soldiers became casualties from Dec. 31, 1862-Jan. 2, 1863. With the blessing of local politicians, ravenous developers have carved up much of the rest.
Real conversation this morning with an NPS employee behind the desk at the visitors' center:
Me: "Can you tell me where the 45th Mississippi fought?"

NPS employee, after a minute or two studying maps: "They were near the Baskin-Robbins, Sam's Club and Walmart."
Ugh.
To see the roughly 2,500 acres of battlefield beyond the national park, you need patience, a great guide, a good attitude and a world-class imagination. Maps, too. Really good ones.
On Sunday, friend Stan Hutson—whose knowledge and love for the battlefield are unrivaled—showed me a seldom-visited site where Confederate soldiers advanced under fire near Sinking Creek on Jan. 2, 1863. (You may remember Hutson from this column I wrote about the vanishing Stones River battlefield for Civil War Times magazine, this blog post on Fortress Rosecrans and this post on his remarkable finds on a soon-to-be-paved over section of the field.)
To get there, Hutson drives through a neighborhood of circa-1980s ranch houses to a construction site. Behind us this overcast morning, we spot mountains of topsoil, man-made craters, piles of rocks, huge pipes and the outlines of streets—all preparations for yet another residential housing development. In the near distance, we eye a 30-acre farm field—this oasis in the middle of suburbia is barren today, but the farmer has planted it with soybeans and other crops in the past.
"That's as close as we'll probably get to seeing the battlefield as it looked on Jan. 2, 1863," Hutson tells me. He points out on a Blue & Gray magazine map the Confederate regiments who wheeled across this ground to attack the U.S. Army positioned behind us.
41st Alabama, 14th Louisiana, 40th North Carolina, 20th Tennessee, the Orphan Brigade ... and more.
In this nascent development, relic hunters have uncovered evidence of the fighting—bullets (including a French pattern .69 caliber "Triangle Base" round like this), artillery shell fragments and more. I wonder what battle artifacts could be recovered in the mountains of topsoil.
In late 2020, the American Battlefield Trust saved 42 acres nearby—a site originally destined for industrial development. That ground where little to no fighting occurred could become a park. No organization or individuals stepped up to save the site of the housing development—ground where significant action occurred.
Is it too late to save the farm field?

— Have something to a add (or correct) in this post? E-mail me here.