A moment in time: Yankees at Washington Circle in April 1865

In April 1865, more than two dozen soldiers in Company I of the 9th Veterans Reserve Corps gathered for a photograph in Washington Circle in the nation's capital. Enlargements of the glass-plate image, believed to have been taken April 9, the day Lee surrendered to Grant at Appomattox Courthouse, Va., are revealing. I spy two unshaven, young soldiers in the back row; a drummer boy grasping a pair of drum sticks and holding a large drum at far right; and in the background ... 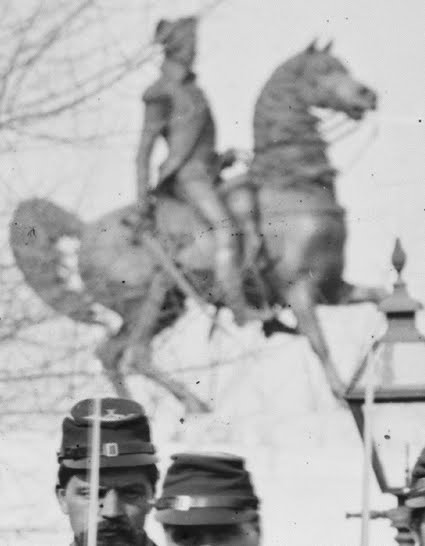 ... there's this impressive, bronze equestrian statue of George Washington. It was dedicated by President James Buchanan with great fanfare on February 22, 1860 -- Washington's birthday. Among the honored guests, according to the Washington Evening Star, were "surviving Officers and Soldiers of the Revolution, in uniform" as well as War of 1812 and Mexican War veterans.

At the far left of the image, we find this smartly attired officer, undoubtedly the commanding officer of this Veterans Reserve Corps unit. The soldier leans on an impressive dress sword, and on the front of his frock coat, he wears a badge or medal. Originally called the Invalid Corps, the VRC consisted of partially disabled or infirm soldiers who were designated to perform light duty.

The soldiers wear gloves, probably an indication they have gathered for a ceremonial event. 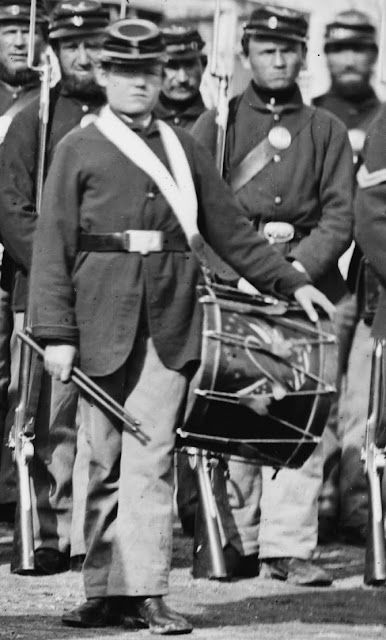 And here's the youthful drummer boy. His eagle drum apparently is like this one auctioned by Heritage Auctions for $3,750 in December 2018, and here's a pair of Civil War drumsticks sold by The Horse Soldier of Gettysburg for $225. During the war, the Union Army contracted Noble & Cooley of Granville, Mass., and other firms to make military drums. Noble & Cooley is still in business today, although not at the original factory, which burned in 1889. (Here's a 2012 blog post on my visit there.) 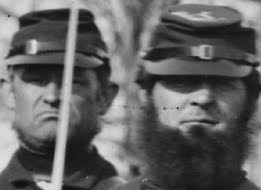 In the left background, we find a soldier with large ears -- why so grumpy, sir? -- and a comrade sporting a beard any of these guys would appreciate. 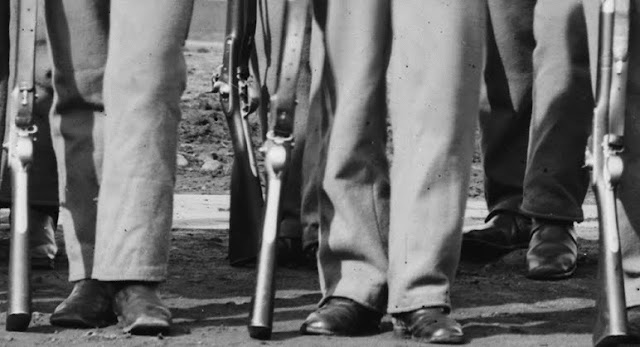 A good view of their weapons of war.

March in this footwear? I think I'll pass. 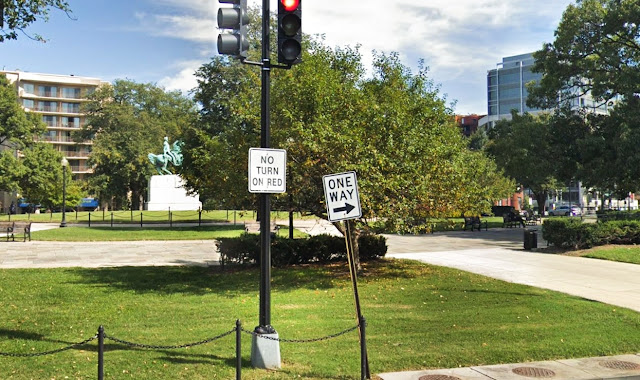 And thanks to Google Street View, here's a October 2018 shot of the 1865 photograph site ... with a lot modern clutter, of course. The Washington statue, which cost the government $60,000, is still in the circle. Go here to tool around the image for yourself. Go here to download the 1865 image in jpeg and .tif formats from the Library of Congress Civil War photograph collection web site. Let me know what else you find ... or what I may have screwed up.