In 15 images: A ballgame on hallowed ground at Shiloh 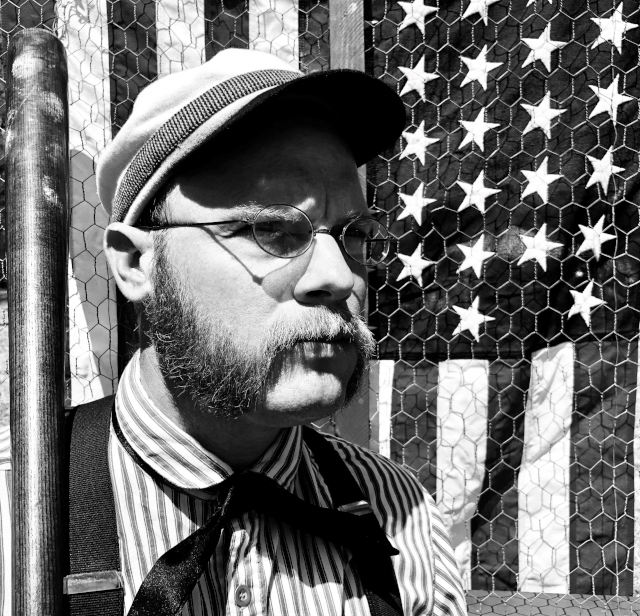 Trapper Haskins of the Franklin Farriers poses by the backstop.
(HOVER ON IMAGES 1, 2 FOR COLOR VERSION; EFFECT WORKS ON PC ONLY.) 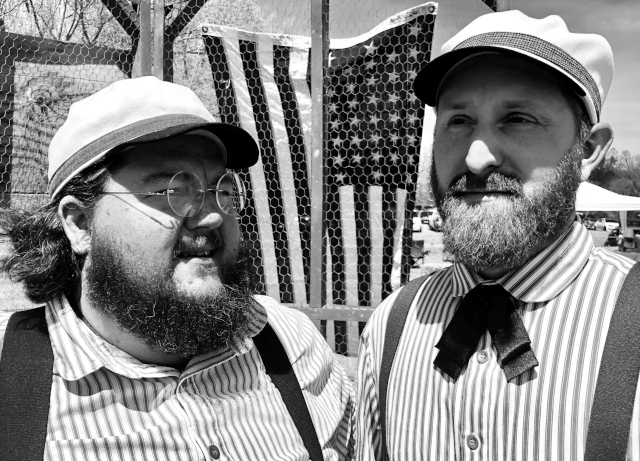 Farriers "Meatball Morgan" and "Arky,"  no relation to  Hall of Famer Arky Vaughan.

On a spring day in 1862, soldiers in opposing armies aimed to kill each other in farmer Joseph Duncan's field at Shiloh. On a Saturday in April, the 157th anniversary of the first day of the battle in southwestern Tennessee, opposing forces merely wanted to outscore each other on the same turf. At the invitation of the National Park Service, teams in the Tennessee Association of Vintage Base Ball played two games on the hallowed ground. Gods of sport smiled: The sky was clear and the temperature tipped into the 80s.

In an odd juxtaposition, a double play was turned yards from cannon that marked a Confederate artillery position and a monument for a Union brigade headquarters. Fans relaxed on lawn chairs and bales of hay, watching players in old-time uniforms. Drinks and snacks were available from a stand set up behind a ballplayers’ bench covered by a small tent. Fastened to a portable backstop, a large U.S. flag fluttered in a gentle breeze. Also attached to the barricade was a bell, intended to be rung when a run scored. Nearby, a cannon boomed during an artillery demonstration.

Men from the Quicksteps of Spring Hill, Franklin Farriers, Phoenix of East Nashville and Stones River Scouts tossed and hit a softer cousin of the baseball we know. A white-bearded arbiter,  referred to today as an umpire or sometimes by a profanity, made calls. Like most competitors during the Civil War, the ballplayers on Saturday didn't use gloves to catch the ball, often called an "onion" 150-plus years ago. A bat? That's a "willow."

Baseball and Shiloh are not as unusual a mix as they may seem. During the war, soldiers played the game on battlefields and in prison camps. A ball even was retrieved on the hallowed ground in 1862. “Picked Up on the Battle Field at Shiloh by G.F. Hellum," reads the inscription on the "lemon peel ball," another name for the orb.

The boys of '19 go by nicknames -- "Meatball Morgan," "Liberty," "Spud," "Mule" and "Suspenders" are among my favorites. A burly slugger named "Lefty" considered the experience "awesome." His teammates did, too.

And so we wonder what the boys of the spring of 1862 would think of it all. Games played on hallowed ground? We bet wherever their spirits linger, they'd be pleased. Like "Lefty," perhaps even smiling. 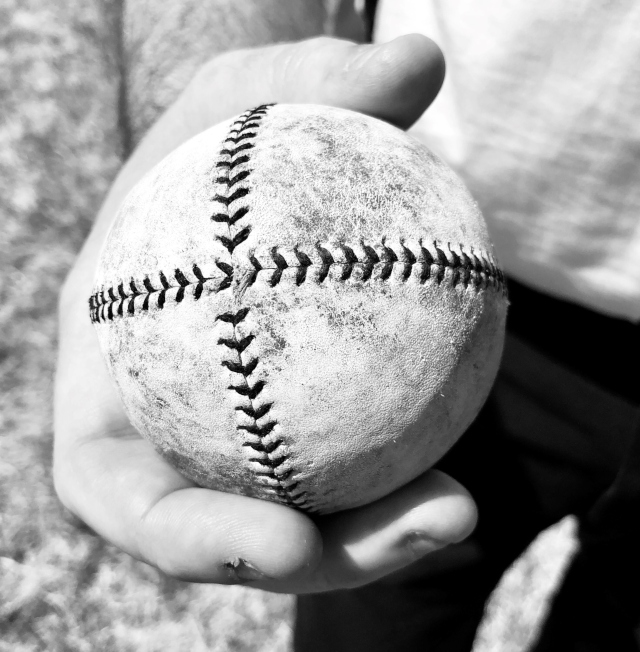 Close-up of the ball, or "onion," used during the games at Duncan Field at Shiloh.
(HOVER ON IMAGE FOR COLOR VERSION. EFFECT WORKS ON PC ONLY.)