Days after the Battle of Antietam, Alexander Gardner and James Gibson shot several photographs of the Middle Bridge, also known as Antietam Bridge, on the Boonsboro Pike. Although little fighting took place in this area, the bridge was used by thousands of troops in both armies to cross Antietam Creek, perhaps the reason the photographers chose it for subject matter. (The bridge, built in the early 1800s, was destroyed by flood in 1891. A modern bridge crosses the creek today.)

On initial inspection, this Gibson image, taken from a steep bluff on the east bank of Antietam Creek, is unremarkable. But cropped enlargements of the photograph, available in high-resolution format on the Library of Congress web site, reveal cool details you may not have noticed. Click on the image above to enlarge -- the famous East Woods, where fighting raged on Sept. 17, 1862, appear in the right background, just above the farm buildings. Traveling west (to the left), the village of Sharpsburg is about two miles down the turnpike.

What else do you see?

... the ghost-like image of a man, his elbow resting upon the bridge near its east end. To his right, a large piece of cloth or canvas. What could that be?

.... several feet from the man leaning against the bridge, another ghost-like figure and what appears to be a barrel resting on some type of implement ....

.... toward the west end of the bridge, we find three human-like forms, each looking like the grainy figures that appeared in a Nov. 22, 1963 photograph of that infamous grassy knoll in Dallas. ...

... at the bottom of the image, this unusual object appears. What was it used for?

... and on land in the background, on the west side of the creek, split-rail fencing, apparently with little damage ...

... and in the middle background, more fencing, apparently undamaged. A short distance over the ridge, a sunken road infamously known today as Bloody Lane ...

... and in the upper right, the farmhouse, barn and outbuildings used by tenant farmer Joseph Parks.  During the battle, the farm was well within Federal lines, but no significant action took place there. The farm may have been used as a hospital after the battle, although definitive information could not be found. Accessible to battlefield visitors, the farm is rarely visited. Below are present-day images of the Parks barn and farmhouse (in background). To visit the farm, park at the war-time Joshua Newcomer House on the west side of Antietam Creek and follow the signage for the 3 Farms Trail. 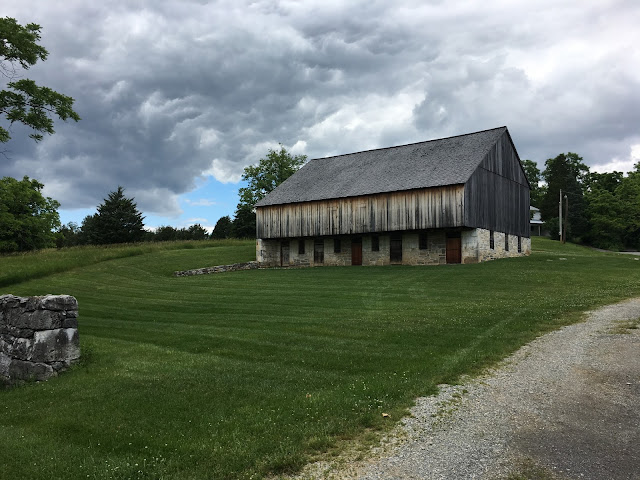