'No end to the things': Fabulous Gettysburg bullet find in 1910 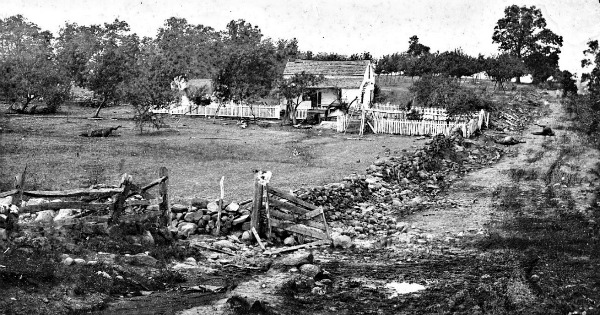 While digging up Taneytown Road near General George Meade's old Gettysburg headquarters, workers made an amazing find in the spring of 1910: hundreds of bullets from the Civil War. It was the first big relic find on the battlefield in years, according to a local newspaper.

"The plough was turning up the road at a lively rate when the first were seen," the Gettysburg Times reported on May 14, 1910. "A hurried search was made and heaps of thirty or forty were found. There seemed to be no end to the things and before the time for quitting work came almost 850 had been found."

The newspaper speculated the ammunition was discarded by soldiers in the Pennsylvania Reserves after they were issued new ammo, or the bullets may have simply fallen from an ammo crate like this one. Or perhaps the little lumps of lead were placed there by someone with an ulterior motive.

"Some have even been so unkind to intimate that they may have been planted," the Times noted, "to accommodate the wishes of the tourist trade for that kind of relic to take home."

In any case, the relics were quickly snapped up by road workers. "One man had half a bucket full of the leaden things," the newspaper noted, "while others managed to get large shares of the bullets."

My all-time favorite Gettysburg "bullet" find story -- pardon the awful pun -- is nothing to sneeze at. During the battle, 6th North Carolina Sergeant Calvin Cook was shot in the head. He survived, but the wound he suffered at Gettysburg troubled him for decades. In the winter of 1915, nearly 53 years after the battle, the veteran from Catawba County, N.C., had a sneezing fit.

"... he 'blew' his nose with uncommon vigor and out rolled his souvenir of the greatest battle of the Civil War," a March 1915 story in the Oakland Tribune  noted under the headline "Vet Sneezes Out Gettysburg Bullet." The story, originally reported in North Carolina newspapers, was picked up by other newspapers in the United States.

“He always thought that it was a piece of shell that struck and cut him,” the Hickory (N.C.) Mercury reported in February 1915. “He had no idea it was a ball. The wound soon seemed to get well. He did not realize there was anything in there, but he could not breathe through one of his nostrils. Saturday, January 23, he blew his nose and a small minnie ball fell out of it on the floor. "

Cook's nasal trouble disappeared when the "bullet" -- perhaps really a large piece of buckshot -- rolled out.

Believe it or not.