Like this blog on Facebook | Follow me on Twitter
Decades after a Confederate sharpshooter killed John Sedgwick at Spotsylvania Courthouse, Va., on May 9, 1864, a witness to the death of the beloved Union major general wrote of gathering a souvenir from the tragedy. John G. Fisher, then a lieutenant in the 14th New Jersey, claimed he cut down the bush upon which Sedgwick bled, let it dry in the sun, sliced off a five-inch section that formed a "Y" and carved into it the date "May 9." After the war, he kept it on his mantle, "a reminder of the cold-blooded manner in which our gallant commander was killed."

Here are 10 other notes about the death of "Uncle John," the highest-ranking Union general to die during the war:

Ulysses Grant's reaction: "I do not think I ever saw Grant so much moved as he was then, except once in Burlington, N.J., when we received a telegram from Mr. Stanton, telling of Mr. Lincoln's death."
--  Frederick Dent, Grant's aide-de-camp. who wrote he plucked a violet from the spot Sedgwick died.

The body man: Thomas Holmes, the man who embalmed Sedgwick in Washington, is known as the “Father of Modern Embalming.” He received a commission as a captain in the Army Medical Corps during the Civil War and was assigned to Washington. He resigned his commission when he realized the commercial possibilities of embalming. (He charged $100 a body.) He also embalmed President Lincoln.

"A singular pertinacity" After Sedgwick's embalming, his remains were visited at Holmes' establishment on Pennsylvania Avenue by a "large number of persons," the Washington Star reported three days after the general's death. At least one of them was a souvenir hunter. "A lady exhibited a singular pertinacity," the newspaper reported,  "to procure a memento of the fallen hero by clipping two buttons from his coat."

Simply appalled!  On May 25, 1864, the Richmond Dispatch trashed Mary Lincoln, wife of the president. The First Lady's offense? Her signed card attached to a bouquet of flowers lay on Sedgwick's breast during a viewing of the general's remains in New York. Wrote the newspaper:


"The Yankees love of notoriety is a passion which prevades all classes of Yankee society and is equally distributed among both sexes. It flourishes in situations where it could not be expected to exist -- it rages even in the presence of death -- it finds food for gratification in the very honors which are paid to those whom the Yankees are to extol as heroes. Is there a Southern woman so lost to propreity, so destitute of modesty, so entirely divested of that delicacy which should characterize the true lady, as to append her name to an offering so sacred as this ought to have been, upon an occassion so solemn?"

Major donation: In 2017, effects of the Sedgwick aide who escorted the general's body home to Cornwall Hollow, Conn., were donated to the Frederickburg and Spotsylvania National Military Park. Captain Richard F. Halsted's frock coat and kepi were to be displayed there, according to the Free-Lance Star of Fredericksburg, Va.

A final goodbye:  As the general's coffin was lowered into his grave in Cornwall Hollow six days after he was killed, "a peal of thunder like the roar of distant artillery reverberated along the heavens, sounding his requiem and the tired soldier rested," according to a Sedgwick family history.


THEN & NOW: Vets pose at John Sedgwick's monument at Spotsylvania Courthouse.
(Large format Then & Now photos here.)
"Detestable" roads: On May 12, 1887, thousands attended the dedication of the Sedgwick monument at the spot where the general was killed 23 years earlier. Getting there from Fredericksburg, about 12 miles away, was a chore for some of the attendees, who included 300 veterans from Sedgwick's VI Corps. "It was not the army's fault the roads in Virginia were detestable [during the war]," an account noted. "They were still detestable, and it was only after more than three hours of the roughest sort of journeying that Alsop's farm was reached."

Believe it or not: During their stay in the area for the dedication, 14th New Jersey veterans went searching for the spot they buried Sergeant Abram Black, a comrade killed at Spotsylvania Courthouse on May 13, 1864. Amazingly, according to this 1887 account, a farmer had plowed up the remains a week before their visit. Black's bones were shipped home and re-buried in a family plot.


"A dream of long ago": In his speech at the monument dedication, 3rd Vermont veteran Samuel Pingree, a Medal of Honor recipient and former Vermont governor, said::


"This fatal spot was the altar on which he made the last sacrifice that falls to the lot of a brave man to make -- the sacrifice of life that his government and ours might continue to hold a name and place among the commonwealths of the earth. Those scenes and tragic activities of our young lives, once so familiar and so real, are now beginning to seem like a dream of long ago."

"Less shaking of hands": After an effort by Confederate veterans was rebuffed to put a monument near The Bloody Angle at Gettysburg, a Virginia newspaper believed Southerners were slighted and should be less magnaminous toward their former enemies. Two days after the Sedgwick monument was dedicated, the Peninsula Enterprise of Accomac, Va., wrote:


"...We cannot refrain from expressing the opinion, that until our victors learn to be more generous, there should be less shaking hands 'over the bloody chasm,' and less of that gushing effusion of sentiment which our people express every time one who wore blue crosses Mason's and Dixon's line. A monument to General Sedgwick, a federal officer, has lately been erected at Spotssylvania C.H., to which no objection not only was ever made, but in the ceremonies attendant thereon many Confederates participated. Was the memory of such a man deserving of more respect than our own heroes? It is right to forgive our enemies, but until they show less enmity to us, perhaps we should be in the future less demonstrative in our affection for them, and less willing to honor the dead of those, however noble the record made in their lives, who are actuated by such hostile feelings for our dead heroes." 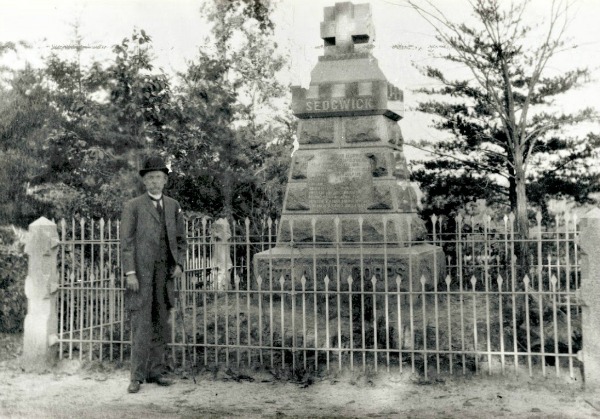 THEN & NOW: Late-19th or early-20th century photo of vet at Sedgwick monument.


Have something to add (or correct) in this post? E-mail me here.