Top posts of 2016: Antietam, Gettysburg and a Bible story

Three of the top five most popular posts on my blog in 2016 were on the Battle of Antietam. Thanks for reading. 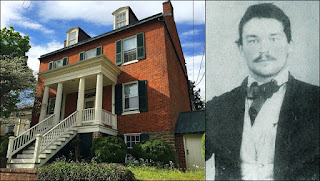 5. SEND MY BIBLE HOME TO ALABAMA: On July 4, 1864, Confederate Private Lewis Branscomb was killed by a Union sharpshooter in the front yard of a house on Washington Street in Harpers Ferry, Va., (now West Virginia). The owner of the house recovered Lewis' Bible, and nearly three months after the war had ended, she sent a letter to his mother in Alabama.

"At the place he died," Margarett Cross wrote, "I picked up a Bible and written on the fly leaf was his name 'L.S. Branscomb, Co. D, 3d regiment of Alabama.' On the next leaf was written if found on my person please send to my mother Mrs. B.H. Branscomb at Union Springs, Alabama. Do so and oblige (friend) who ever you be."  Read more. 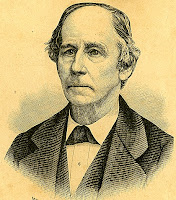 4. DOCTOR'S REMARKABLE ANTIETAM LETTER: Friend of the blog Dan Masters shared with me a fabulous letter written on Sept. 29, 1862, 12 days after Antietam, by Dr. Augustin Biggs, who experienced first hand the battle and its terrible, bloody aftermath.

"They were poorly clad, indeed," the Sharpsburg, Md., doctor wrote of the Confederate soldiers, "and but few dressed alike -- barefooted, dirty, and filthy in the extreme. To judge from appearances they have had no change of dress the past twelve months. Some few were clad in Union soldiers’ dress. Most of them indecently ragged and their person exposed." Read more. 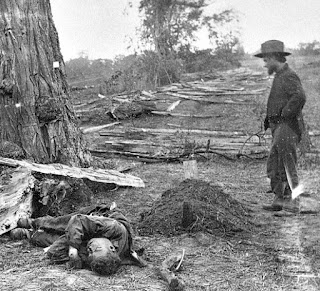 3. GRAVES, SKULLS AND "WASTE OF WAR" -- Nearly 10 months after Antietam, the landscape surrounding the small farming community of Sharpsburg, Md., remained scarred. Bones of hastily buried soldiers poked from the ground. "Sickening to the sight," skulls appeared "here and there," according to a battlefield visitor. The detritus of war -- knapsacks, caps, bullets, artillery shells, shoes, boots, haversacks -- also littered fields and woodlots, the same visitor noted. The white-washed Dunker Church, the most notable building on the battlefield, remained pockmarked by bullets and artillery fire.

On July 15, 1863, the battlefield visitor, probably a soldier from a Massachusetts regiment, wrote a letter to editor of the Boston Journal about his summer day spent at Antietam.  Read more.

2. "MOST VALUABLE"  GETTYSBURG RELIC --  On July 3, 1863, Sergeant Russell Glenn of the 14th Connecticut defended Cemetery Ridge during Pickett's Charge. The next day, he ventured out beyond his lines to survey the awful scene and probably to comfort wounded Confederates. Perhaps, too, he aimed to grab a war trophy, not an uncommon activity of soldiers on both sides.

"I stooped over him and discovered that he had been shot through the heart and probably did not live more than thirty seconds after the fatal bullet hit him," Glenn recalled decades later about a fallen Confederate. "In his hand was a daguerreotype of the above profile, the case of which had been shattered by the deadly ball, but, marvelously as it may seem, the profile remained uninjured."  Read more. 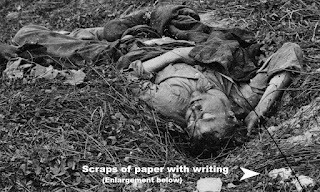 1. ANTIETAM: ANOTHER LOOK AT IMAGE OF FALLEN REBEL: You may have seen this Alexander Gardner photograph of the body of Rebel soldier at Antietam scores of times in books, magazines and elsewhere. According to Civil War photo expert William Frassanito, who explored the photo's secrets in his ground-breaking 1978 book, Antietam: The Photographic Legacy of America's Bloodiest Day, it probably was taken on Samuel Mumma's farm days after the Sept. 17, 1862 battle. Frassanito partly based his determination of the location on the row of Confederate bodies gathered for burial in the upper right background of the uncropped original image. But there's much more to explore in this sad photograph. Read more.