Like this blog on Facebook.
Taken by Alexander Gardner on Sept. 19, 1862, two days after the Battle of Antietam, this photograph of  bodies of Confederates gathered for burial is an iconic Civil War image. The renowned photographer took another, similar shot of  fallen Rebels near Dunker Church as well as a photograph that focused on the battle-damaged church itself. All these photographs were dissected by William Frassanito in his terrific 1978 book, Antietam: The Photographic Legacy of America's Bloodiest Day, and each is available to examine today in high-resolution, TIFF format.on the Library of Congress web site.

The image above has been reproduced countless times in books, magazines, newspapers and online. It also appears on an interpretative marker near the battlefield Visitors' Center, yards from where Gardner set up his camera to shoot the photograph more than 153 years ago. You can even view an impressive, colorized version of one of the images here.

But have you really seen the iconic image at the top of this post? Cropped enlargements of it offer interesting perspectives and perhaps details you have never noticed ... 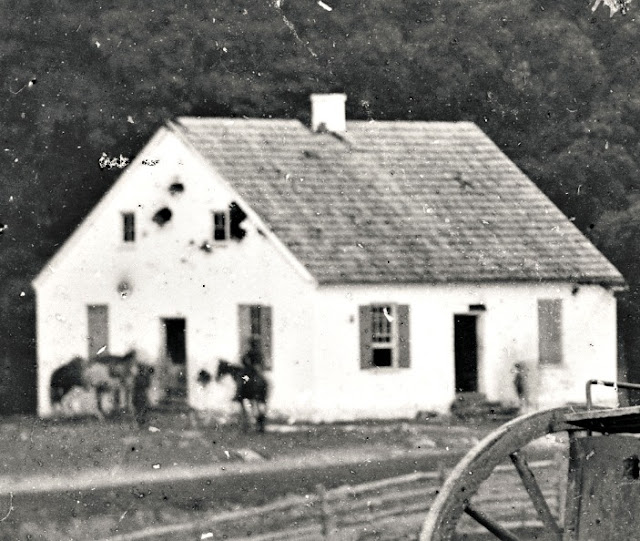 ... this blurry enlargement includes the figures of two horses and at least two people (near entrance and side entrance) at the Dunker Church, which was used as a makeshift field hospital. Easily seen in this enlargement is damage to the small, white-washed brick building, which was struck by artillery and "perfectly riddled" by bullets. "I visited the little church in the edge of the wood but it's nothing but a wreck," 5th Maine Captain Clark Edwards wrote a month after the battle.

Two days after Antietam, Captain George Noyes, a member of General Abner Doubleday's staff, wrote a seering description of the scene at the church:


"A few severely wounded rebels were stretched on the benches, one of whom was raving in agony. Surgical aid and proper attendance had already been furnished, and we did not join the throng of curious visitors within. Out in the grove behind the little church the dead had already been collected in groups ready for burial, some of them wearing our uniform, but the large majority dressed in gray. No matter in what direction we turned it was all the same shocking picture, awakening awe rather than pity, be-numbing the senses rather than touching the heart, glazing the eye with horror rather than filling it with tears." 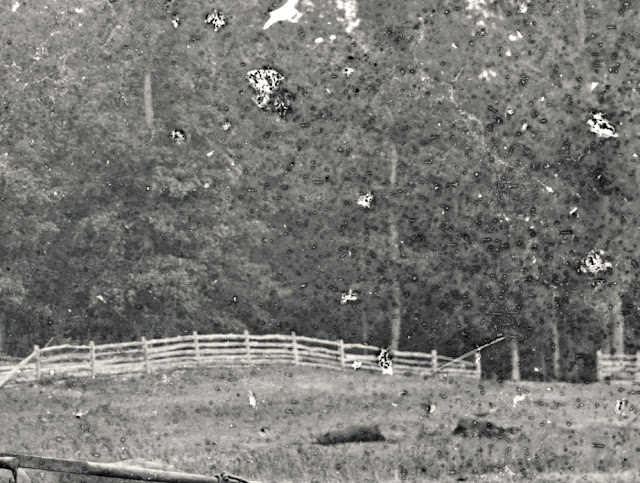 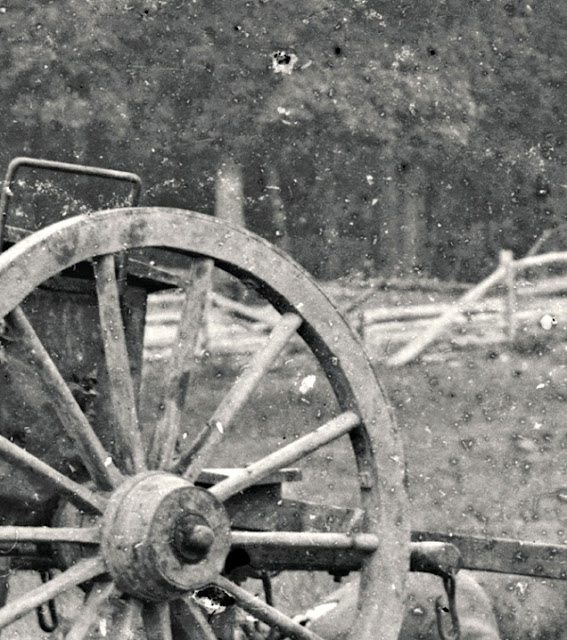 ... this enlargement shows broken fence rails and the heavily contested West Woods beyond. The post-and-rail fences along Hagerstown Pike were well constructed, according to the 106th Pennsylvania regimental historian, who wrote:  "... there was a fence on each side of the pike, a strong post and six-railed fence, that the One Hundred and Sixth Regiment had to climb and the mounted officers ride some distance to the right to get through an opening."

Portions of the fence, a frequent target for bullet-hunting souvenir seekers after the battle, survived into the early 20th century.  "The old post and race fence that has been standing along the pike north of the Dunkard Church for nearly a half century, and which was marked with hundreds of bullets, has been torn away on the west side," noted Antietam guide O.T. Reilly wrote in the Shepherdstown (W.Va.) Register on May 20, 1909. "It had been hunted over by thousands of persons in hope of finding bullets. A number of panels still stand on the east side, and we hope they will be left for a while yet to show to visitors." (Hat tip: Rare Images of Antietam by Stephen Recker.) 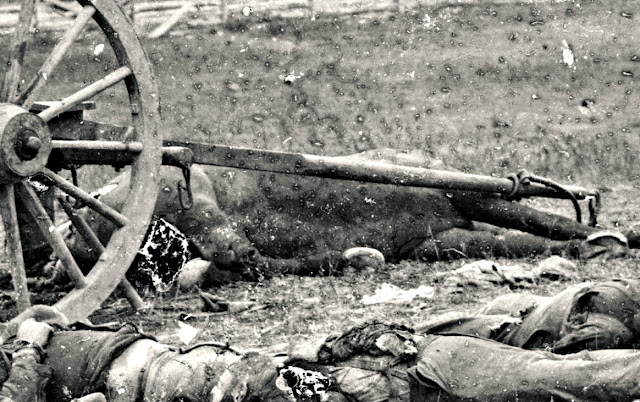 ... a dead horse and torn, bloated bodies near a Confederate artillery limber chest ... 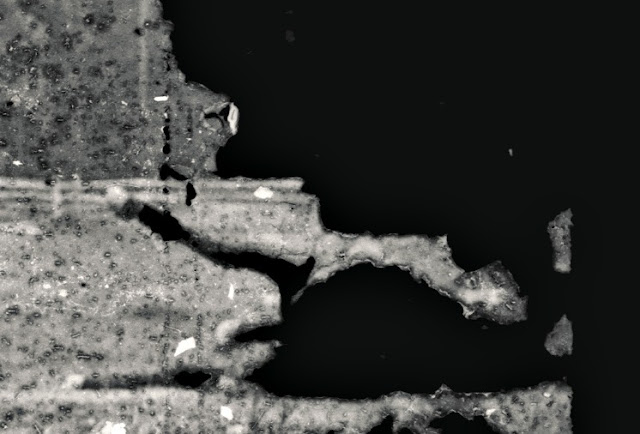 ... and another dead horse, its hind leg awkwardly in the air, appears in the right background of the damaged negative of this version of Gardner's image. ... 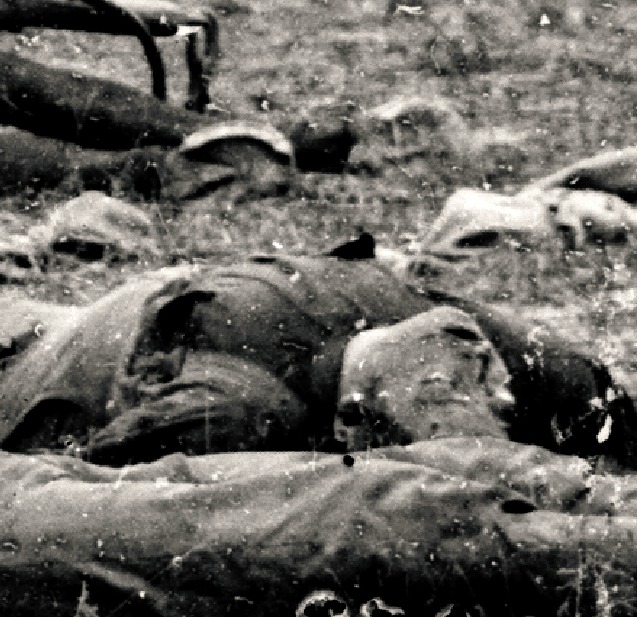 ... while in this close-up a fallen Confederate shows us the ugliness of war. Unburied for two days, this soldier's body is bloated as decomposition has begun. The eight dead Confederate soldiers in Gardner's image were likely buried haphazardly in a trench by Union soldiers, who buried their own dead first. After the war, they may have been disinterred and reburied in a Confederate cemetery in Hagerstown, Md., or Shepherdstown, W.Va. ... 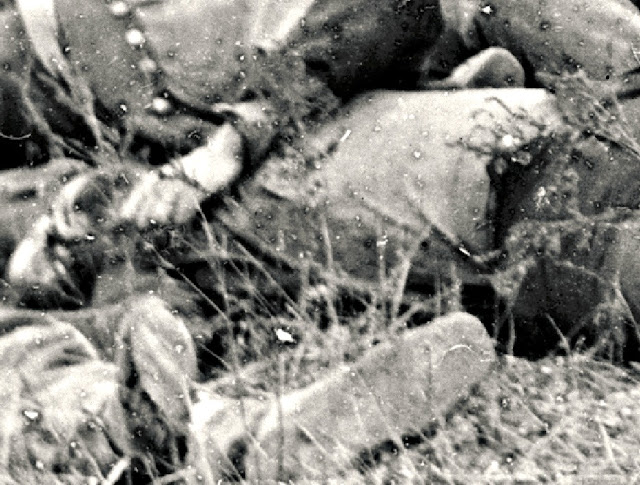 ... another close-up of fallen Confederate, his trousers perhaps opened by the expansion of gases within his decomposing body. Noyes also described the shocking sight of  Rebel dead near the Hagerstown Pike:


"Their faces are so absolutely black that I said to myself at first, this must be a black regiment. Their eyes are protruding from their sockets; their heads, hands, and limbs are swollen to twice their natural size. Ah! there is little left to awaken our sympathy, for all the vestiges of our common humanity which touch the sympathetic chord are now quite blotted out." 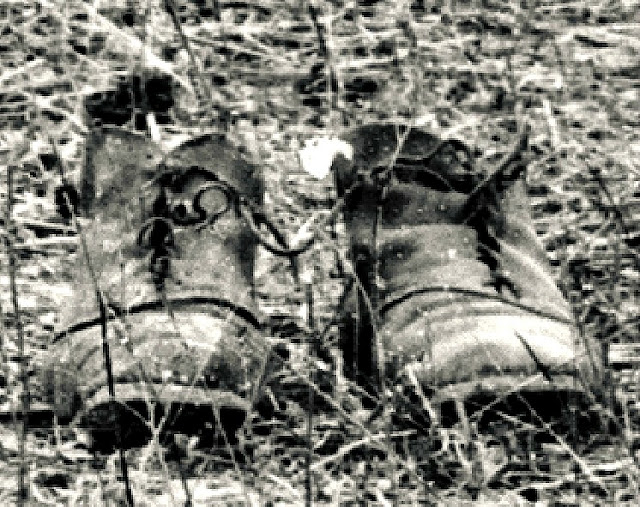 ... and in the foreground of the original image is this incongruity: a pair of easily overlooked shoes yards from the bodies.