As Alexander Gardner's bulky camera captured the image above of the village of Sharpsburg four or five days after the Battle of Antietam, Union wounded from the V Corps were being treated in the church that appears prominently at left.

Mount Calvary Lutheran Church, built in 1768, was one of three Sharpsburg churches that were used as hospitals after the battle. In enlargements of Gardner's image, heavy battle damage appears on the side of the church, which was used as a signal station by the Rebels and thus may have been a primary Federal target.

Upon close inspection of the image, gravestones in the Lutheran cemetery behind the fence and even four men in front of the church are readily apparent. (The cemetery is still preserved today.) The glass plate image is so sharp, in fact, that in the second enlargement below a window on the opposite side of the church may be seen through the window on the right.

About a quarter-mile down the main road in Sharpsburg, well out of view of Gardner's camera, more Union wounded, including many from Connecticut, were being cared for at the German Reformed Church. Privates Horace Lay and James Brooks of the 16th Connecicut and Private John Doolittle of the 8th Connecticut died there. Another church in Sharpsburg, St. Paul's Episcopal, which also suffered damage from Union artillery, was used primarily as a Rebel hospital. It may be seen in the background of another image that Gardner shot of Sharpsburg, also recorded on Sept. 21 or 22, 1862, according to research by William Frassanito in his excellent 1978 book, Antietam: The Photographic Legacy of America's Bloodiest Day. 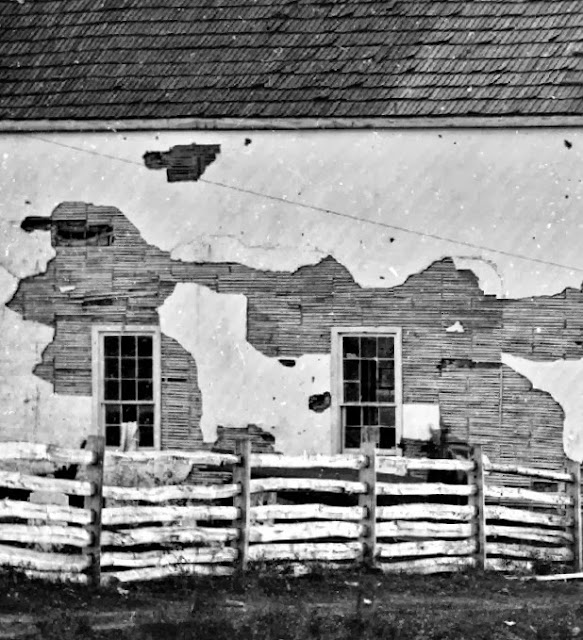