Heroes & hoop skirts: A visit to an obscure Tennessee battlefield

With apologies to Confederate private-turned-famed author Sam Watkins, the Battle of Britton's Lane (Tenn.) was "a sideshow of a sideshow to the big show." But small doesn't mean uninteresting. Among the battle's backstories and main storylines:

Obscurity be damned, how could a visit be resisted? And so I drove 150 miles west from Nashville, departing Interstate 40 at Exit 76 and traveling through a southwestern Tennessee blur of cornfields, road kill and Trump-Pence yard signs. Arrival: 2 1/2 hours after departure. Initial battlefield impression: Where the heck am I?

Roughly 12 miles southwest of Jackson, Tenn., the Britton's Lane battlefield is, ah, isolated. To my right, I found a rolling field of scrub; to my left, a ridge and a strip of woods; above me, a circling vulture or two. No other human was in sight. On my phone, I found a non-functioning Google Maps app. Damn.

The publicly accessible section of the battlefield includes a Confederate mass grave, the obligatory Civil War Trails marker (they're everywhere!), a half-dozen other battlefield markers, a monument dedicated in 1897, a "cage" with a scraggly teamster and two faux horses, and a reconstructed war-time cabin that served as a battlefield hospital. (The bloodstained floors of the cabin, which originally stood about 3/4 of a mile away, are no more.) 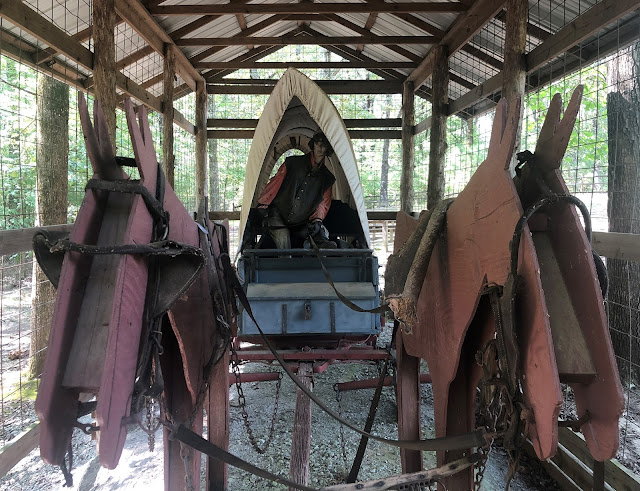 Here's what else you need to know: In late August and early September 1862, about 3,000 Confederate cavalry troopers with bad intentions were roaming the Tennessee countryside near Jackson. In addition to protecting Jackson, an important Federal depot, the Yankees guarded the Mississippi and Tennessee Central Railroad and moved supplies throughout the area.

The Rebels' force was commanded by General Frank Crawford Armstrong, a 26-year-old son of a U.S. Army officer. (Francis Wells Armstrong died when Frank was only months old.) Born in Indian Territory, Armstrong was a graduate of the College of Holy Cross in Massachusetts and served with Albert Sidney Johnston in the Utah Expedition against Mormon settlers in 1857-58. At the First Battle of Bull Run, he commanded Union cavalry, but Armstrong resigned his commission less than a month later and declared his allegiance to the Confederacy. In addition to overall command of raids in the area, he led a 2,000-soldier cavalry brigade.

Armstrong was joined by 1,000 horsemen commanded by Colonel William Hicks Jackson, a 26-year-old West Point graduate, who, after the war and death of his first wife, married the daughter of a man who owned a 5,300-acre Nashville plantation. His grandson, William Harding, became deputy director of the CIA in 1950.

Confederates were not especially enamored with the fighting capabilities of Armstrong. He was no Nathan Bedford Forrest afterall. They were also famished. "Without rations for man or beast," one of them recalled.

Wary of an attack on Jackson, a Yankee force was looking for them. Composed of a light artillery company and infantry from Illinois (including Shiloh veterans) and an Ohio cavalry unit, the 600-man force was led by 49-year-old Colonel Elias Smith Dennis, a long-haired, former politician from Illinois.

For at least one Union soldier, the countryside near Jackson was a "lonesome, Godforsaken region," full of "hair-raising hoots, screams and yells of the owl and the blood-curdling songs of the myriads of musketoes." Daytime was "ominous," nighttime "hideous," recalled Benjamin F. Boring of the 30th Illinois.

On the morning of Sept. 1, the enemies unexpectedly met four miles from Denmark, which sounds kind of strange when I read this sentence out loud. The Federals took a superior defensive position behind a rail fence on a slight rise by a dusty lane on the Britton family farm. The ensuing battle called for as "great a degree of nerve and pluck," Boring wrote, "...as was required to face the leaden hail at Shiloh or to stem the artillery at Gettysburg."

"Pretty warm work," another Union veteran recalled. Not all 30th Illinois soldiers were battle-ready. Some were spotted sampling the goods at an old still in the rear.

Attacking in waves as infantry and cavalry, the Rebels were more a "yelling, hooting" throng than an organized fighting force. "... they seemed," Boring remembered, "to be firing at the sky."

"A mob of cotton pickers," another Union veteran remembered.

In the four-hour fight, Confederates captured more than 200 Yankees, a large wagon train and two cannons. But they were driven off with heavy losses -- more than 100 killed and dozens wounded. The U.S. Army suffered less than 10 dead.

"How so many men got out of that field alive is one of those unaccountable things that sometimes occur in war," a Confederate veteran wrote.

Armstrong's men, meanwhile, put nearly 90 POWs in the Masonic Lodge on the second floor of the Denmark Presbyterian Church, where local Rebel soldiers reputedly hid under the hoop skirts of their girlfriends to avoid their capture by Federal soldiers in 1863. Union captives from the Britton's Lane battle were paroled, but not before some of them apparently scrawled their names near floorboards of the church -- marks that remain today.

Eager for good news 19 months into a war the Union was losing, Northern newspapers played this battle up as a huge win.

"One of the fiercest and most brilliant little battles yet recorded in this fearful struggle for constitutional liberty," the Chicago Times called it, adding the Illinois boys fought like "pent-up tigers."

To puff up the accomplishment, newspapers exaggerated the size of the Confederate force (8,000 men!) and played up Union exploits. The Times described an incident in which a Confederate captain put a pistol to the head of a 20th Illinois captain and ordered him to surrender. "But our hero was too soon for him," the newspaper reported, "for the words had no sooner passed from his lips than the gallant Captain of the Twentieth shot him dead from his horse."

When Confederate cavalry demanded the surrender of a 20th Illinois teamster, a Union-controlled Jackson (Tenn.) newspaper wrote, the man replied, "Surrender, hell that's ‘played out,’ ” then somehow whipped his mule to escape the enemy. It also reported the discovery on the battlefield of a carpet bag containing a suit of officer's clothes and the commission of hard-driving Confederate cavalry commander Robert "Black Bob" McCulloch.

"Our men were left masters of the field," the Jackson newspaper wrote, "and one hundred and eleven dead rebels told how fearfully they had been dealt with."

Unsurprisingly, the battle aftermath was dreadful. Throughout the area, Confederate wounded filled houses. On the battlefield, "men lay on their faces, sprawling on the hard, dusty road, underneath dead or crippled horses, among logs, etc.," Boring recalled. "One old fellow, badly wounded, was lying in a yellow-jackets' nest, and calling piteously to be helped out. He was dragged out, set up against a tree, and given a canteen of water; but he soon fell forward on his face."

Early the next morning, area women grimly flocked to the battlefield to attend to their dead.

"... it was a novel as well as a sad scene," Boring recalled, "as we marched away for Canton Station, to see those women and girls pulling the dead bodies of their friends out from among dead horses, logs, brush-heaps, etc, gathering them up out of the road, washing their dirty, bloody faces, laying them out on the grass along the road, crying and taking on over them, amid the jeers and remarks of the tougher class of soldiers as they passed by."

But a local 14-year-old had perhaps the most grim assessment of all, In a diary entry, she wrote:


"Very hot day. Papa got to Mr. Britton's house. Lot of soldiers been hurt... Papa went up road to see where fite was. Boys come here to get water for horses. Sade they won and yank run... awfull smell & boys hurting Papa says to Mama many died at end of lane at woods. Papa says many horses dead on top of Boys. ... many died last nite many was put in soil where they fell...it was to hot on bodies and many flies... awfull smel much sadness. Fences down, awfull flies ...