In July 1888, generals James Longstreet and John B. Gordon joined roughly 300 other Confederate veterans and thousands of their former enemies in Gettysburg for a reunion on the battle's 25th anniversary. Most newspaper accounts of the Grand Reunion offered a rosy picture of the massive July 1-3 event, organized by the Society of the Army of the Potomac.

“The meeting of the survivors of the armies of Meade and Lee on the field of Gettysburg,” a Pennsylvania newspaper proclaimed, “is the greatest occasion of the kind known in our history, if not in the annals of nations.” 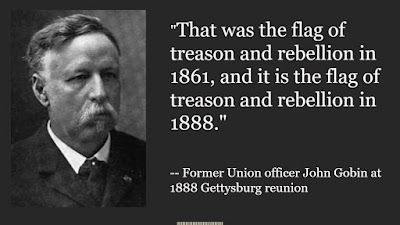 "The Yankees were killing the Southerners with kindness," wrote the New York Times, adding, "It was a pity every soldier of the old South could not be at Gettysburg to-day to witness the royal welcome extended to ancient foes."

But not all Federal veterans bought into the reunion lovefest notion. In impromptu speeches at a morning campfire gathering on the battlefield, Union veterans John Gobin and John Taylor offered scathing criticism of Confederate veterans at the reunion who had the audacity to wear badges adorned with a Rebel flag — and of the event in general.

Gobin, who did not fight at Gettysburg, served as an officer in the 11th and 47th Pennsylania during the war. In 1888, he was a general in the Pennsylvania National Guard and active in the Grand Army of the Republic, a Union veterans' organization.

In his campfire address, Gobin said he was tired of hearing about Pickett's Charge, the subject of many speeches throughout the three-day reunion. Why some of the Confederates simply charged across a field and surrendered weaponless, with their hands up, he scoffed. Gobin said nearly every division in the Army of the Potomac showed more distinguished valor at Gettysburg.

His audience hollered its approval.

"The General said that the Grand Army of the Republic and the men who wore the blue were disposed to display all kindly feeling and extend the hand of friendship and of assistance to their late antagonists," the Reading (Pa.) Times wrote of the reunion, "but this 'gush' and glorification of a rebel was not elevating in its effects on the youths of the country."

Taylor, who fought at Gettysburg, also blasted "glorification" of his former enemies. As an officer in the 2nd Pennsylvania Reserves, he was captured at the Wilderness in 1864 and spent 10 months as a prisoner. In 1888, he was quartermaster general of the Grand Army of the Republic.

"I want no part or lot in this intolerable slobber and gush," the 48-year-old veteran said at the campfire, "and if I did take part in these reunions with men who are wearing rebel badges, I would be untrue to the comrades of my old company who fell on this field and some of whom are now resting in this beautiful cemetery."

Word of the Pennsylvania veterans' disdain soon filtered south. "Lurid" and "sulphurous," the Macon (Ga.) Telegraph called Gobin's oratory. "The people of the South will not be disturbed by these words of bitterness," the newspaper wrote. "They do not come from men who represent any respectable element at the North. If Gobin and Taylor want to keep up the war feeling they and their little gang can do so."

Nearly eight years later, though, it remained clear how Gobin felt about the vanquished Confederacy.

"Lee intended that Gettysburg should be his Austerlitz," he said in an address in Gettysburg for the dedication of a monument to George Meade, "but it was his Waterloo, and more than that, the Waterloo of human slavery in the greatest country on earth."


-- Have something to add, correct? E-mail me at jbankstx@comcast.net