What caught my eye at haunting Perryville (Ky.) battlefield

"Squire" was a successful cabinet maker/farmer in Perryville, Ky., raising cows, sheep and pigs and growing corn and oats on more than 600 rolling acres near Doctor's Creek. Then came Oct. 8, 1862, when thousands of soldiers from both armies swept over his property, destroying crops, setting a barn afire with artillery, and wrecking his farmhouse-turned-makeshift military hospital.

Bottom's psyche was wrecked, too. Asked during his war claim testimony after the war if "Squire" recovered from his losses, a Perryville doctor replied, "No sir, he never did. He was broken in spirit from that time on until he died." The 53-year-old's losses included nine cows, 30 sheep, two horses, 4,500 pounds of bacon, 3,000 bushels of corn, 22 tons of hay, and 50 bushels of oats.

Bottom sought more than $4,000 in compensation from the U.S. government -- a princely sum at the time -- but the supposed Southern sympathizer never saw a penny of it during his lifetime. Long after 92-year-old Henry's death in his bullet-riddled battlefield house in 1901, his heirs were finally awarded a whopping $228.66.

I recently walked the ground on Bottom's old farmstead, examining ground unsuccessfully defended early in the battle by the Don Carlos Buell-led Army of the Ohio. What a hauntingly beautiful field -- hallowed ground where more than 7,600 soldiers  (4,201 Federal, 3,401 Confederate) became casualties in perhaps the war's most unheralded battle.

Scouting report: Lord, what's with all these heart-racing hills? Perryville looks like a wool blanket haphazardly tossed on the floor. On a captivating fall afternoon, I topped out at 122 bpm on my FitBit during a particularly tough stretch. And I was only armed with an iPhone ... Remove the power lines, markers and the few memorials and you're living in 1862. So beautiful; so pristine. And the 19 miles of trails in the state historic site are excellent. It's the Western Theater version of Antietam (and another Union victory, too.) ... Interpretive markers: Outstanding, although some are weather-worn and badly need TLC. (Only one mention of "hail of fire" noted. Yikes!) ... Names to know: Parsons Ridge, Dixville Crossroads, Starkweather's Hill, Hartzell's Fence, Devil's Lane ... Road kill spotted: One skunk, one raccoon, one possum.

Here's what else caught my eye: 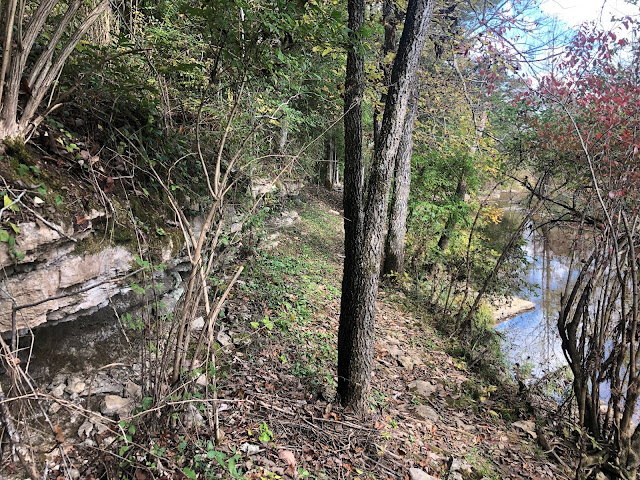 DOCTOR'S CREEK, where thirsty 42nd Indiana soldiers were filling their canteens with water near these cliffs when Confederates struck. The first enemy cannon shot ripped apart tree limbs, a Hoosier recalled; the next one knocked away a stand of guns. What a fearful sight for a rookie regiment. 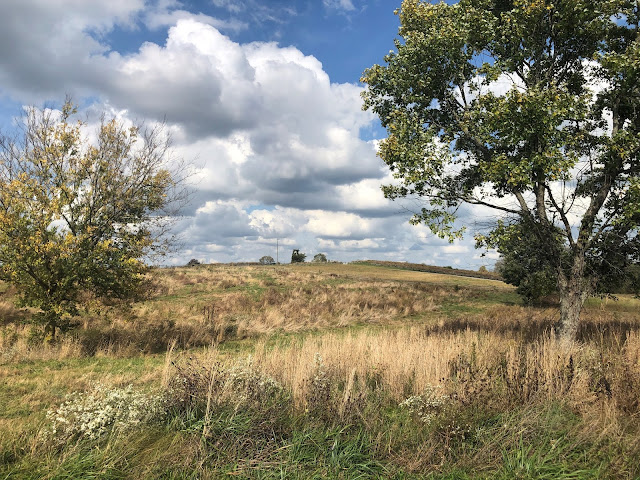 GROUND COVERED BY DANIEL ADAMS' BRIGADE: Here where the one-eyed general -- Adams lost the other at Shiloh -- and his soldiers attacked the Federals, who held ground near Bottom's burning barn in the far distance. Some wounded Yankees died in that ghastly inferno. 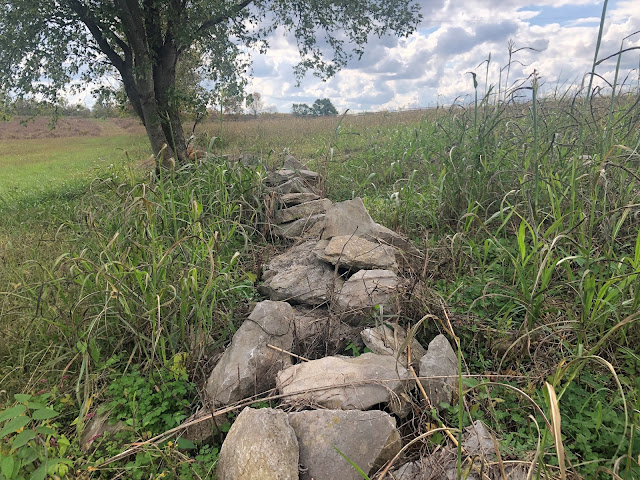 A RE-CREATION OF WAR-TIME STONE WALL on the Bottom farm. In 1862, the wall here was  used as meager cover by Confederates. 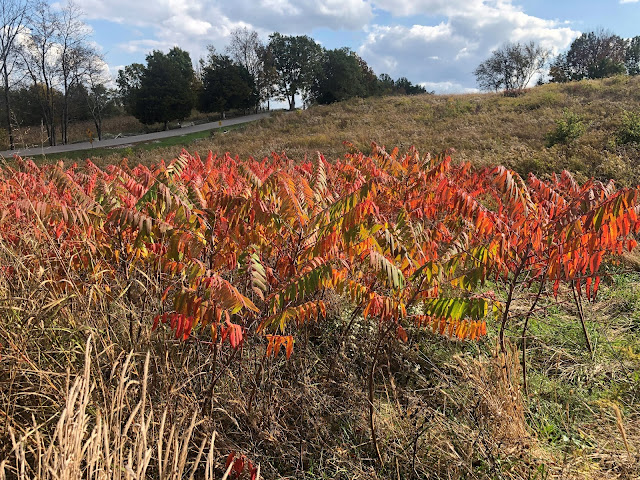 EERIE COLOR. At the crest of Union-defended Starkweather Hill, an interpretive sign told of ground made slippery with blood during a Confederate assault. Two eagles soared overhead in a deep-blue sky. Then I looked down and saw this lone patch of brilliant color at the foot of the hill. 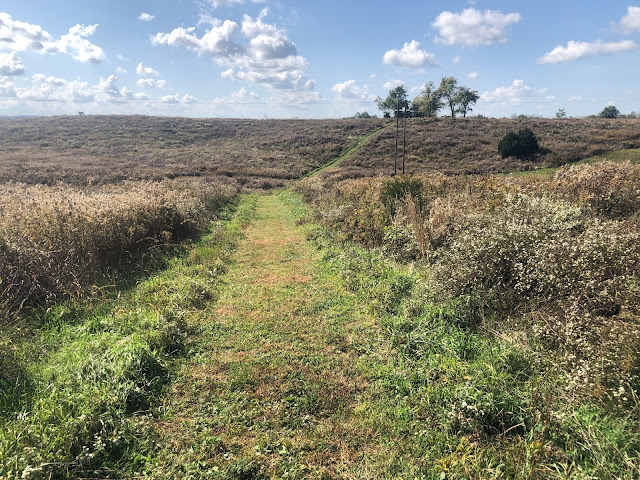 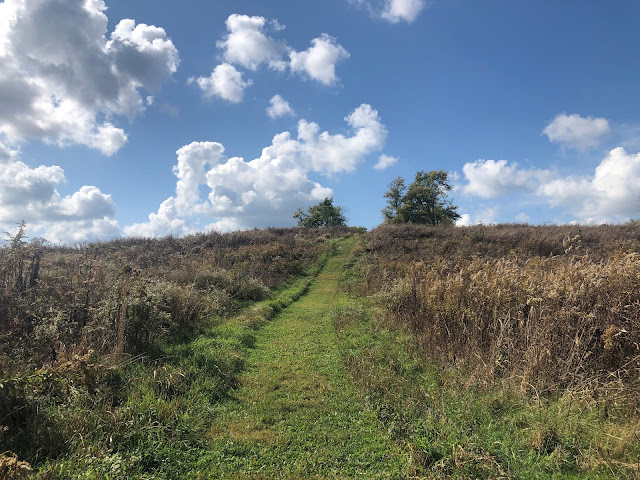 THESE BEASTLY HILLS: 900 Mississipians advanced here under fire here against a numerically far superior enemy on the opposite ridge. The men and boys who did this weren't just soldiers, they were athletes."Of all the horrible suffering," a Union soldier recalled of the sight, "I [hope] I may never witness the like again."

Decades later, a Confederate veteran speculated about why many of his comrades suffered so many head and mouth wounds. "...it was in a desperate charge on the enemy, who were posted on advantageous ground and were first-class marksmen," he recalled. "The Confederates in making the charge were yelling with all their might. There was little to obstruct the vision of the Yankees, who drew a fine bead on the charging and yelling Confederates." 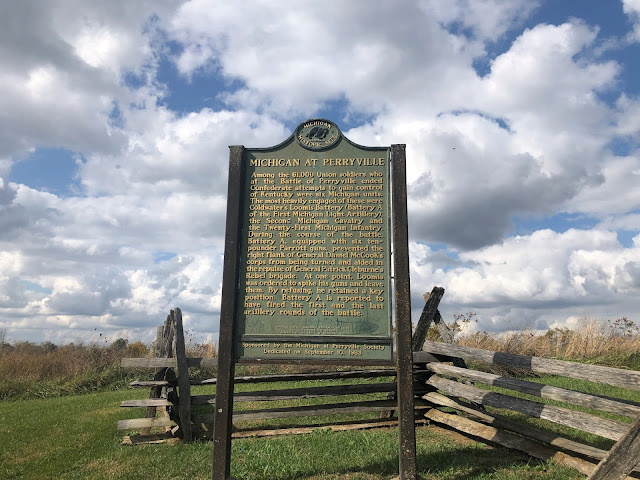 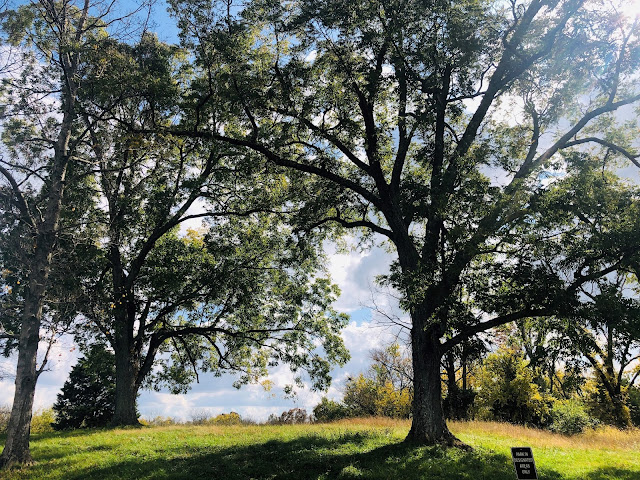 A KNOLL OF DEATH: John Russell's ideally situated home became Union General Alexander McCook's HQ. Then it became a hospital. Scores of horribly wounded men and boys from both sides lay in and around the two-story, Federal-style house. Fighting here was fierce. "Trees not more than one foot in diameter contained from twenty to thirty musket-balls and buck shot, put into them during the battle," a Perryville doctor recalled.
At a soldiers' reunion 24 years later, the battlefield yielded scores of relics. "The ground was tickled," a Kentucky newspaper reported, "and it gave forth a crop of canister shot, bullets, old sabre points, pieces of shells, and other evidences of the destructive material which had been used in that engagement. ... We hardly believe we exaggerate when we say a half bushel of minie balls, grape and canister shot and shells was picked from the furrows of the now tilled fields that day." 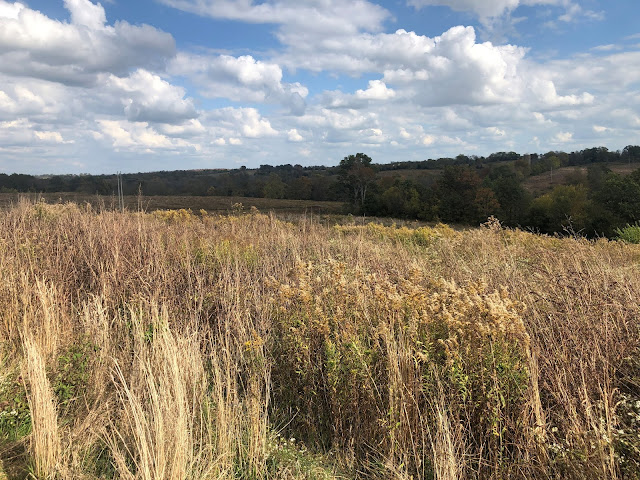 WHERE "DIXIE" DIED: After Patrick Cleburne's Confederates advanced up this hill, the Irish-born general's horse was shot from under him, supposedly by a one-in-a-million artillery shell fired from 1,650 yards. Miraculously, the "Stonewall Jackson of the West" only suffered an injured ankle, and he continued to lead his troops on foot. 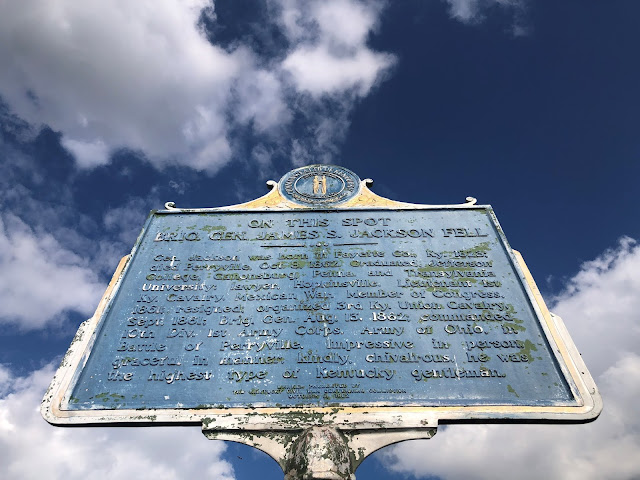 WHERE A UNION GENERAL FELL ATOP PARSONS RIDGE: "Impressive in person, graceful in manner, kindly, chivalrous, he was the highest type of Kentucky gentleman,” the historical marker describes James S. Jackson, a 39-year-old brigadier general. The New York Times 1862 obituary wasn't as kind: "He leaves no family to mourn his loss. In manner he was brusque and overbearing, and as a consequence was a party to numerous quarrels, which sometimes resulted in duels. One of the most notable of these difficulties was a street fight in Hopkinsville, Ky., in which he had the misfortune to kill his antagonist." 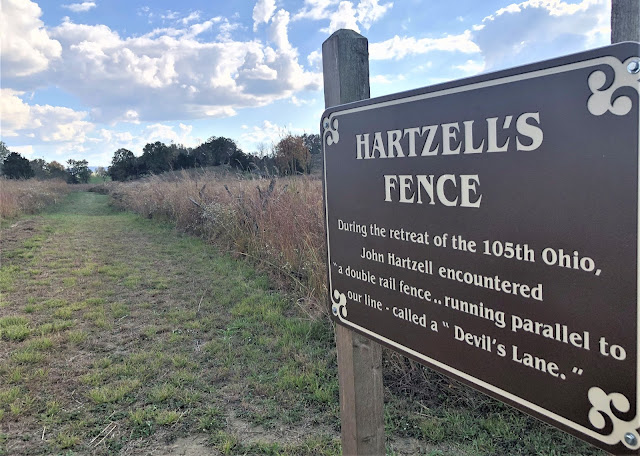 WHERE OHIOANS FLED ... and in a cornfield in the left distance, green soldiers from Wisconsin nervously waited as Confederates routed their comrades on Parsons Ridge. 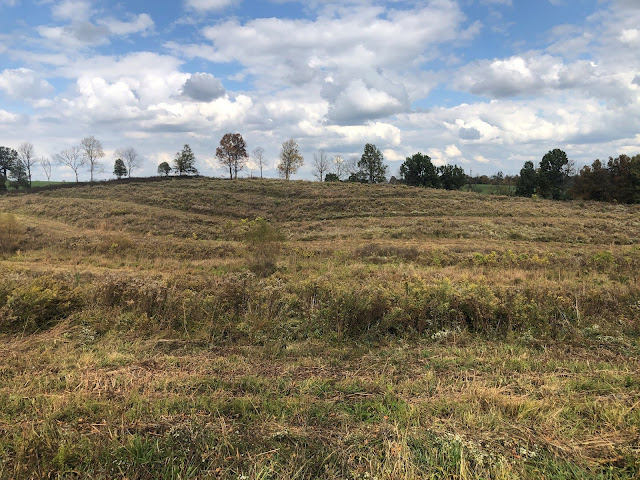 WHERE A CONFEDERATE GENERAL NARROWLY ESCAPED: Leonidas Polk found himself behind Union lines here. Somehow he deftly rode his horse back to his own lines and ordered “no man to ... fire a gun unless he had dead aim on a Yankee.” The result was devastating for the U.S. Army. Less than two years later, at Pine Mountain (Ga.), Polk was killed by a well-aimed, three-inch Federal artillery shell that went through his chest. 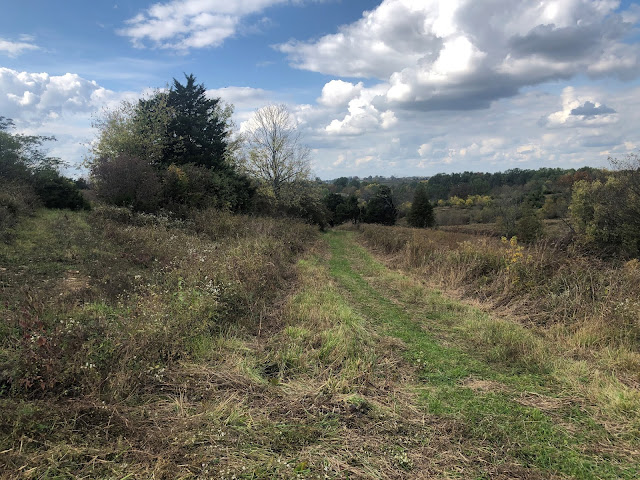 WHERE U.S. ARMY AVERTED DISASTER: Dozens of Union supply wagons were parked here, near the Dixville Crossroads. If Braxton Bragg's Army of the Mississippi captured them, the Yankees' I Corps would have been cut off from the rest of the Union Army. 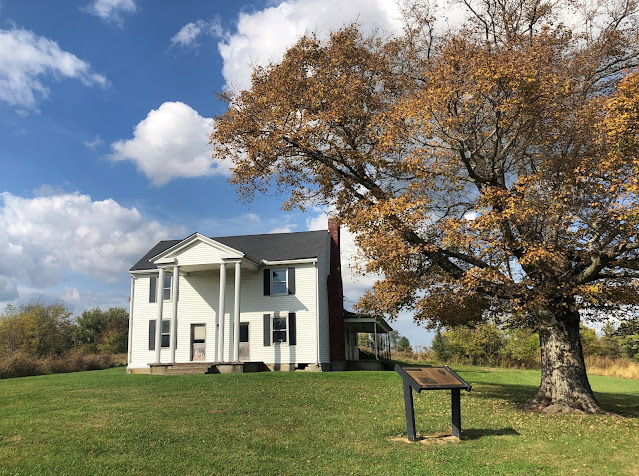 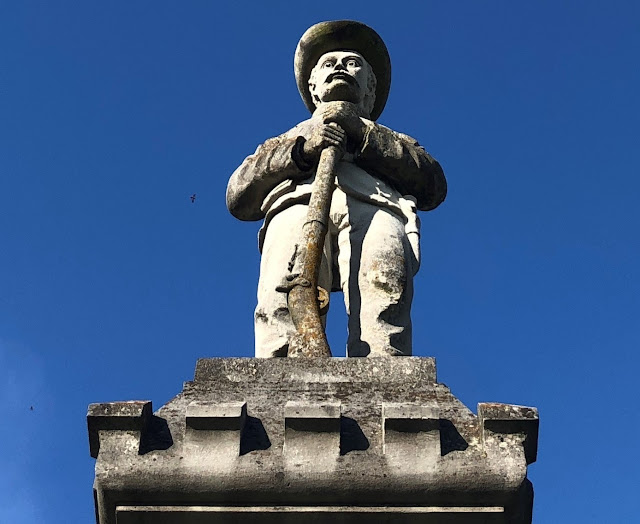 THE DEMONIC EYES ON THE STATUE of the musket-toting soldier atop the memorial at the Confederate mass grave on Farmer Bottom's war-time property. "Squire" buried most of these unfortunates. 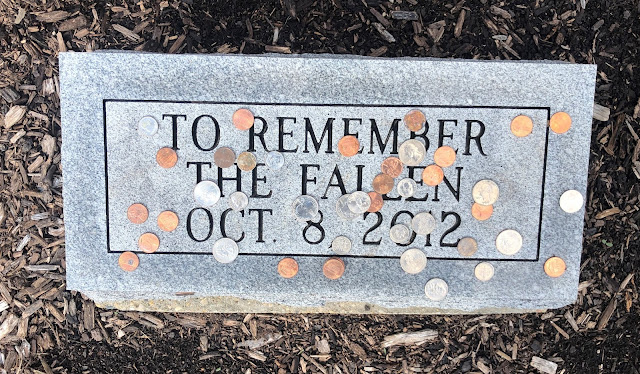 AND IN THE CONFEDERATE CEMETERY, A MARKER FOR THE FALLEN, who remain unforgettable.