What caught my eye at Brice's Cross Roads (Miss.) battlefield

On June 10, 1864, cavalry commander Nathan Bedford Forrest, a military genius but a loathsome human being, whipped a numerically superior force at the Battle of Brice's Cross Roads. Confederates inflicted 2,610 casualties (vs. roughly 500 of their own), captured 200 supply wagons and more than a dozen artillery pieces, and added the lead bullet point to Forrest's impressive Civil War resume. The U.S. Army wasn't blessed with anyone with the high military IQ of the "Wizard of the Saddle" -- nearly its entire supply train was parked in a field within easy range of Confederate gunners.

Brice's Cross Roads scouting report: Fine interpretive markers but empty boxes for pamphlets. (Remarkably did not see mentions of "hail of fire" or "storm of lead.") Good walking trails. Battlefield visitors: Two. Hello waves by locals: Many. Rural Mississipians score high on "Blogger Friendliness Meter." Wildlife spotted: One dead armadillo, clawed feet pointing to the heavens.
Here's what else caught my eye:
A MARKER NEAR THE CROSSROADS with the obligatory "battle-scarred" and "blood-stained floors" references.
A MASS GRAVE for Confederate soldiers in Old Bethany Cemetery, near the crossroads. 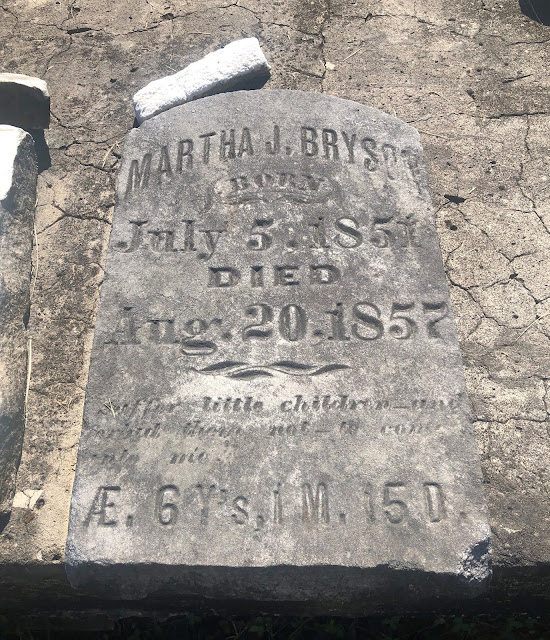 THESE WEATHER-WORN (AND PERHAPS BATTLE-SCARRED) GRAVESTONES in the cemetery, where fighting swirled, causing havoc in the then 11-year-old burial ground.
FOUR GREAT WORDS ... on this stone on a ledge of the memorial for Reverend Samuel Agnew, whose church was destroyed during the battle. 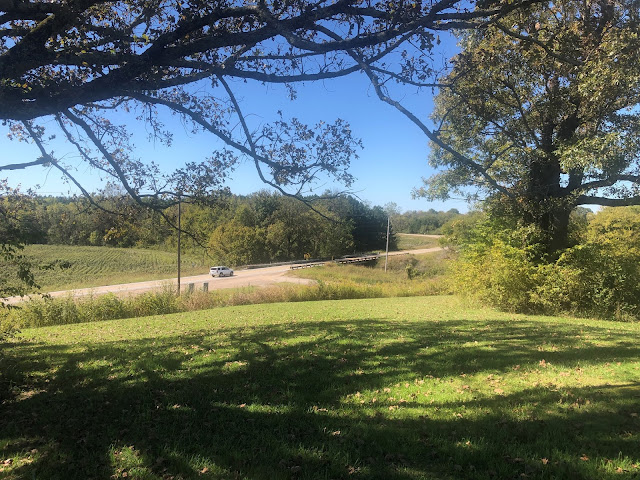 THE VIEW FROM LOG CABIN RIDGE. From here, on an oppressively hot late-spring day, Forrest's artillery shelled Yankees as they crossed the narrow bridge across Tishomingo Creek, yards ahead of the car about to cross the modern span in the near distance. 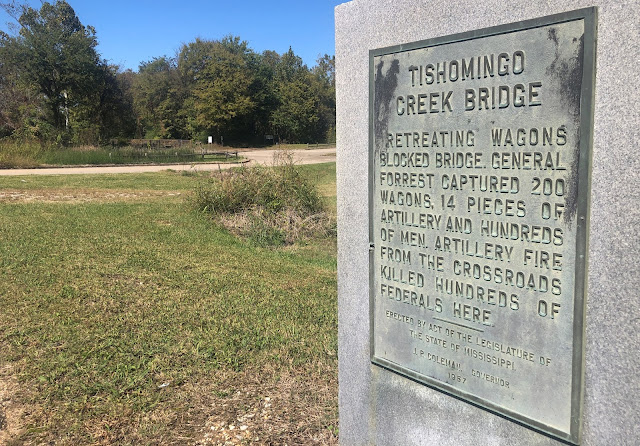 A STATE HISTORICAL MARKER spelling out the awful result for the U.S. Army. 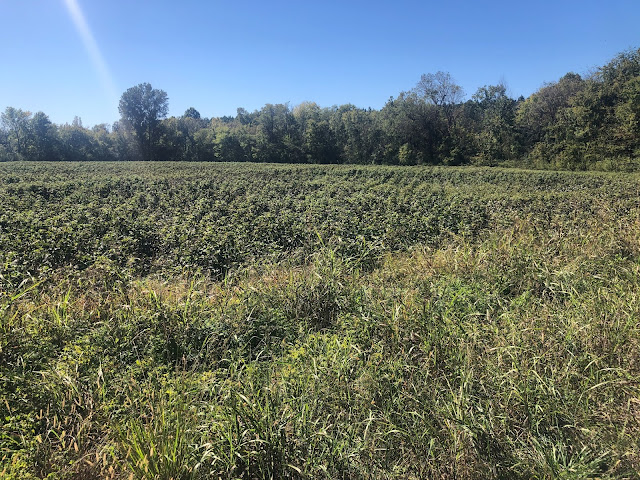 A FIELD where most of the 250-wagon U.S. supply train was parked. When the Federals retreated  across the rain-swollen creek, the wagons clogged the bridge, causing massive panic among the troops. "It was like a scene from Dante's Inferno," a Federal veteran recalled decades later. 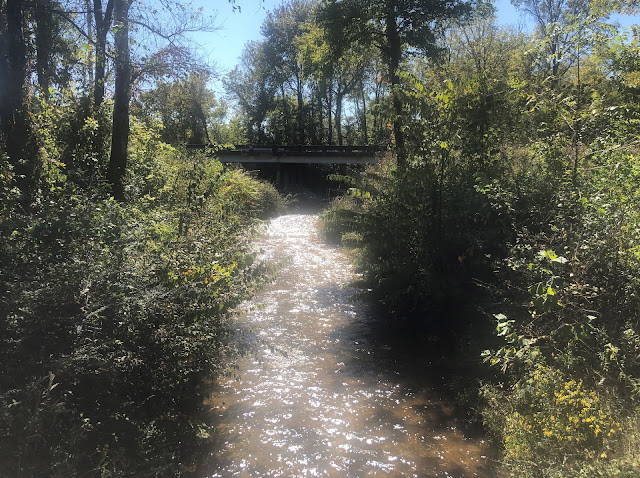 SHIMMERING LIGHT on Tishomingo Creek, near site of the bridge Union soldiers crossed in a panic. In 1953, locals discovered human remains in the creekbed -- probably from a Federal soldier -- along with a pocket watch and rusted remains of an army canteen. He was re-buried in Bethany Cemetery. 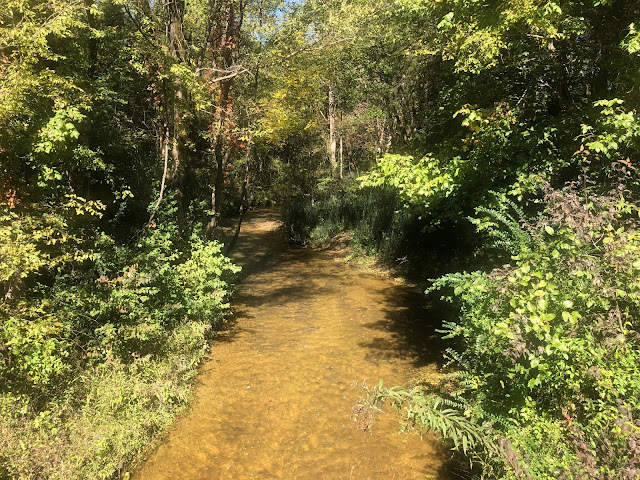 WOODS ALONG THE CREEK, where frightened Yankees fled during the Confederate onslaught. 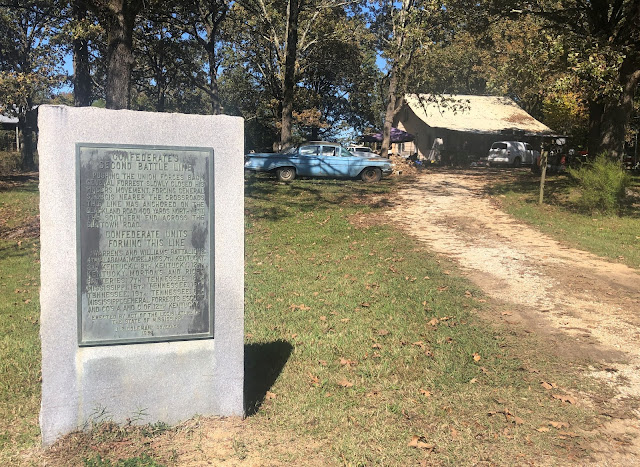 A LIGHT-BLUE CLUNKER beyond the historical marker denoting the Confederates' second battle line. 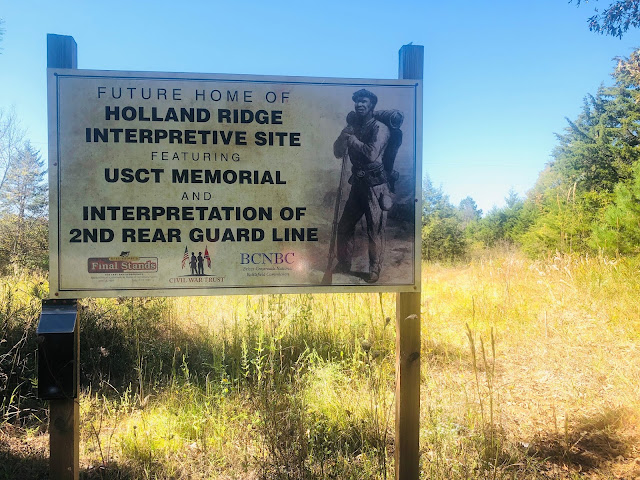 WELL-EARNED RECOGNITION for the 55th and 59th U.S. Colored Troops, who helped buy time for their retreating comrades. 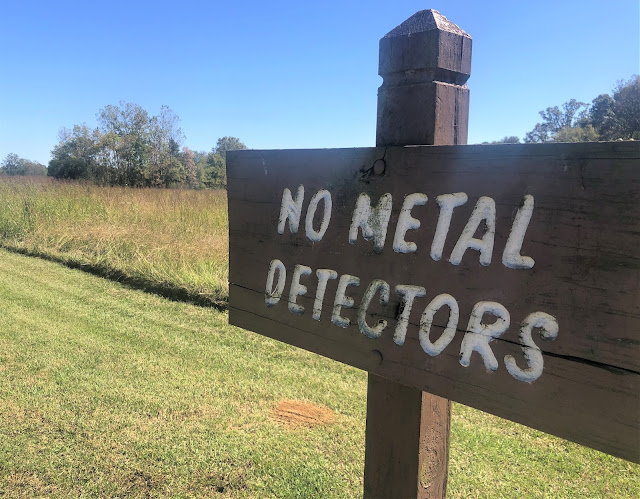 A WARNING that makes sense. 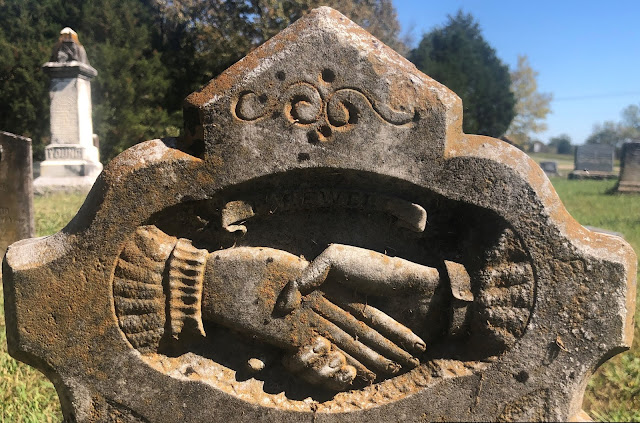 AND A MESSAGE WE ALL CAN EMBRACE NOWADAYS ...
Life. Enjoy the journey.
Always.