Time, nature and trespassers conspire to wreak havoc inside the Greek Revival-style house. Debris spills from a fireplace on the first floor -- one of five in the once-stately home. A brown doorknob, perhaps a victim of a vagrant, lies on the floor, forgotten. Boarded-up windows block a magnificent view of South Mountain. This is where Massachusetts officer Wilder Dwight died in 1862.  Read more.

"Almost every death on the battle-field is different. And the manner of the death depends on the wound and on the man, whether he is cowardly or brave, whether his vitality is large or small, whether he is a man of active imagination or is dull of intellect, whether he is of nervous or lymphatic temperament. I instance deaths and wounds that I saw in Grant's last campaign." Read more.

In the years immediately after the war, the Federal government mobilized to locate and disinter remains of Union dead for re-burial in newly established national cemeteries. By the time the costly program was completed in 1870, nearly 300,000 remains had been recovered. Officially neglected, Confederate dead were mostly left to private organizations throughout the South to recover and re-bury.  Read more. 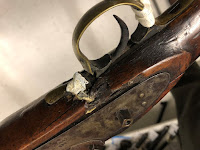 During my visit, Alex MacKenzie and National Park Service ranger Susan Ashman showed off some of what's currently not on public view -- the "secret" stash, so to speak. In a massive, temperature-controlled storage room, rows of meticulously tagged Civil War weaponry are kept in huge cabinets. Look but don't touch were my orders from MacKenzie, who carefully handled the artifacts while wearing gloves.  Read more.

Believed lost to history, the rare photographs are among six to have recently surfaced in New Jersey -- the largest stash of John Meade Gould images yet to be discovered. A unique window into the early, post-war appearance of the battlefield, the photographs have excited Antietam historians, who are hopeful even more "Goulds" will be discovered. Read more.

On a frigid Saturday afternoon, I walked among the rows of graves at the McGavock Confederate Cemetery -- the largest privately owned military cemetery in the country -- shooting photographs. Nearly 1,500 Confederate dead from the Battle of Franklin are interred in a two-acre plot on the former plantation of the McGavock family. See more.

"It is not our intention to attempt a full portrayal of the horrors which, in the early part of last week, marked the battle-field of Antietam, although we doubt not a portion of our account will be considered sufficiently horrible. We were told by those who had preceded us to this scene of destruction, that we obtained a sight of the tail end only. If that be so, we have no desire to see the whole animal." Read more.

Even in the summer of 1907 -- nearly 45 years after Antietam -- effects of the battle were apparent in the village of Sharpsburg, Md., and in the immediate surrounding area. Assigned to write a feature about the battlefield that year, a Buffalo Evening News correspondent easily found artillery damage on the Dunker Church and bullet marks on Burnside Bridge.  Read more.

Nearly 36 years after the Battle of Antietam, a Confederate veteran traveled to Bellefonte, Pa., for an event a local newspaper called a "rather romantic errand." William M. Robbins' intentions certainly were noble: The former major in the 4th Alabama planned to return the sword of 5th Pennsylvania Reserves Lieutenant Hardman P. Petrikin to the soldier's sister. Read more.

Unlike the cumbersome 19th-century process, colorization of black-and-white images is only a click away for us today. Using the Algorithmia site, I colorized Antietam images by Alexander Gardner and James Gibson, all available for your inspection in black and white in jpg. and tif formats on the fine Library of Congress web site. Crude, crass ... or captivating? See more.