Like this blog on Facebook | Follow me on Twitter
Lightning-round Civil War quiz, Virginia battlefields version:
When visiting Shenandoah Valley Civil War sites, you should mainly travel on ...
a.) I-81, risking your life playing "bumper cars" with semis.
b.) The Old Valley Pike (Virginia Rt. 11), where history abounds.
c.) Neither. View battlefields and historic sites via a drone.
The correct answer is B.
The loudest Civil War battlefield is ...
a.) Anywhere living historians fire lots of artillery.
b.) Anywhere living historians shoot hundreds of muskets at the same time.
c.) Cedar Creek, where National Park Service rangers should offer noise-canceling head phones.
The correct answer is C.
When you go on a Civil War journey, it's vitally important to pack ...
a.) Top-notch reading material.
b.) Dozens of PB&Js in a massive cooler.
c.) A belt if you have loose-fitting shorts and plenty of underwear.
d.) All of the above.
The correct answer is D.
And so on Friday afternoon, I drove down the history-rich Old Valley Pike, tramped upon by thousands of soldiers during the Civil War. "The race course of armies," the Times-Dispatch of Richmond called it in 1932. Route: New Market to Stephens City. Miles traveled: 45. Hours allotted: five. Constant companion: one fabulous Blue Ridge Mountain range looming to my right. Gun stores observed: Hundreds. (They like firearms here.) Stops: Many. Dead bear carcass warned about: one. Cares in the world: zero.
Here's what I saw, heard and smelled during my Shenandoah Valley journey:

Quick observations: Unlike the Union Army, Joe Biden will not conquer the Valley ... the best smell on a Civil War battlefield is a walnut ... the official bird of the Valley View Motel (plenty of vacancies!) apparently is a large, intimidating rooster. ("You can get one at the Tractor Supply in Woodstock," a local told me.) "You're not going to steal my rooster?" the proprietor asked. "Oh, no," I said with a laugh before driving off ... You're traveling too slowly when you get passed by a tractor hauling hay.

Masks make National Park Service rangers look intimidating ... I was in a traffic jam in Stephens City, Va. (pop, 2,400)! Sheesh, where did all these people and cars come from? ... Civil War Trails signs are everywhere -- and they are excellent. ... They sell really ugly pumpkins in a field off Apple Drive in Mount Jackson. ... Gosh, I wish I had time to grab a custard at Katie's in Woodstock. ... What's with the combo Confederate/U.S. flag look? That's cool? Stop it. It's ridiculous... If you can't make time to stop at the Filbuster Distillery in Mauertown, you're doing something wrong.

Whooshing along I-81, you can (briefly) see the New Market battlefield from your car. But there's more to check out along the Old Valley Pike. Interesting battlefield: Field of Lost Shoes, VMI cadets go into action, Bushong Farm. Another visit here was memorable for me not for the history but for the cold -- the temperature was about 10 degrees. Yikes.

Ah, more history -- and sad history at that. On a knoll astride the pike between New Market and Mount Jackson, two young Confederate veterans were executed without a trial on June 27, 1865, weeks after they and two compatriots robbed Federal cavalrymen of their horses near Woodstock. In 1893, this marble monument was placed here in remembrance of  Captain George W. Summers and Sergeant Isaac Newton Koontz.
The condemned men found time to write farewell letters. “Very much to my surprise, we must soon leave this world to try the realities of a new one…,” the 22-year-old Summers told his family. In a note to his fiancee, the 20-year old Koontz wrote: "They are now ready to shoot me. Oh, Emma, dearest in the world to me, how can I leave you but I must…Try to meet me in Heaven where I hope to go.”

Sucked in by a half-dozen markers, I stopped at Rude's Hill, near Mount Jackson. OMG, what history! Stonewall Jackson camped here in April 1862 -- his dispatches from this spot included the dateline "Rude's Hill." Jubal Early and Sheridan faced off on Rude's Hill in November 1864. Nearby, Turner Ashby's beautifiul horse, Tom Telegraph, was killed. "As Ashby reached the safety of the Confederate batteries atop Rude's Hill," the terrific Civil War Trails marker here notes, "his faithful charger was unsaddled and led away to die."
Did I mention Stonewall once slept here?

At Mount Jackson, the western terminus of the Manassas Gap Railroad during the war, the Confederate Medical Department built a large hospital. Three two-story buildings accommodated as many as 500 sick and wounded soldiers. Some of the unfortunates who didn't survive are buried across the road, in Mount Jackson Confederate Cemetery. (The "recent unpleasantness" prevented an up-close inspection.) After the war, the 192nd Ohio tore down the hospital, using the lumber for a courthouse, guardhouse, gallows ... and a ballroom on Rude's Hill.

At Fisher's Hill, I once was stared down by a herd/gang of angry cows, apparently mourning a loved one. (It's a long story.) Parts of this battlefield are preserved by the excellent Shenandoah Valley Battlefields Foundation.
Nerd alert! Nerd alert! It was here, at the Stover-McGinnis House near Edinburg, that Stonewall Jackson famously ordered Jedediah Hotchkiss to make him a map of the Shenandoah Valley "showing all the points of offence and defence." The historic house is now part of the Inn At Narrow Passage, a bed and breakfast.

In 1862 and 1864, both armies fought to control strategic Hupp's Hill, near Strasburg. Phil Sheridan's boys built trenches that remain visible. Nearly 400 casualties resulted in a battle fought here on Oct. 13, 1864 -- six days before the much more bloody battle nearby at Cedar Creek. Visit the nice museum and walk the excellent interpretive trails if you have time.
But I was lured in by the sign for a dead bear. Short story: A yearling slipped to its death into one of the many caves throughout the area. The unfortunate animal could not be removed. In a cover-up that should not produce any conspiracy theories, the bad news bear was sprinkled with lime. Dead bears smell when they decompose.
Ooooooh, where's that smell? I wondered. Carefully, I glanced into the cave. No carcass. No smell. But I spent nearly the rest of the trip singing this song.

Cedar Creek battlefield scouting report: Vastly underrated battle that's super-memorable to me because it falls on my wife's birthdate: Oct. 19, 1864. Ah, the date, NOT the year. Let's be perfectly clear. ... Unfortunately, gawd-awful I-81 cuts through the field, making Cedar Creek possibly the loudest battlefield in the world. Where's my noise-cancelling headphones?! I suggested to a National Park Service ranger that they might want to remove the replusive strips of concrete. He smiled. Sort of ... Be sure to walk the two outstanding NPS loops -- that's where undermanned Confederates surprised the Yankees early on the morning of Oct. 19. The terrain is revealing ... There were no braver soldiers than those in the 8th Vermont, which suffered 110 casualties (including three color-bearers) among 164 soldiers at Cedar Creek ... Green walnuts sprinkled the field. Pick up. Sniff. Enjoy. Repeat. Such a great smell. ... And be sure to visit the "quiet" part of the battlefield, especially the Belle Grove mansion. (Here's a "Then & Now" of that impressive place.) 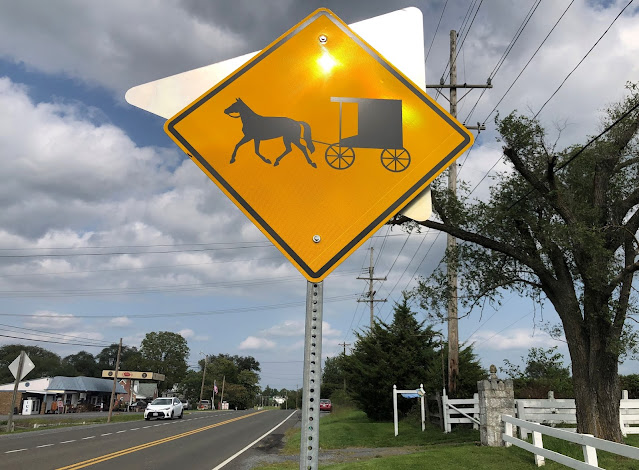 Some travelers on the Old Valley Pike are not as fast as the rest of us. But there's nothing wrong with viewing history from the slow lane.
Remember: Life. Enjoy the journey (but sometimes slowly).
(Pssst! Want to see photos from my 1977 family vacation to Ocean City?)