At a Tennessee slave cemetery, wilted roses and note of thanks

Aiming to clear our heads, my brother-in-law Nels and I biked the back roads south of Nashville on a frigid Sunday afternoon. We sometimes discover the unexpected on our weekly, mind-soothing rides -- an unruly dog in apparent attack mode, a seat on the porch of an out-of-the way general store, a fellow cyclist with a $6,000 bike.

But on this depressing, overcast day, we found the truly unexpected: a small slave cemetery on a narrow median in a neighborhood of million-dollar homes. How strange. Had we been traveling by car, we may have missed this surprise, announced by a black-and-white historical marker.

Nearby, in the mid-19th century, 38 slaves toiled on the 600-acre plantation of Lysander McGavock, who farmed tobacco and corn. After McGavock's first home was destroyed in a fire,  slaves built the wealthy landowner a mansion called  "Midway" in 1847. Today it serves as the elegant headquarters of the Brentwood Country Club.

In this countryside roughly 10 miles from Nashville, skirmishes flared during the Civil War. Nathan Bedford Forrest, a notorious slave trader, raided 700-man Yankee garrisons in Brentwood with a loss of one soldier killed and two wounded in early spring 1863. "Midway" served as a hospital for both armies, which also used the plantation house as a headquarters as they marched back and forth from Franklin to Nashville.

Unlike their master's ornate gravestone on the grounds of "Midway," the markers for the slaves are not inscribed. Most are merely battered stubs of stone. We found wilted, red roses adorning some them, and pedals were scattered about the grounds. Inside the modest cemetery, steps from a busy road, a gray-granite memorial's inscription notes "unsung heroes" who "endured the shackles of slavery." A large wreath of white roses lay against the base of the monument. Small tokens of remembrance -- pennies, pebbles and other stones -- rested on its ledge. Someone left a note there, too.

"Thank you," it reads. "I so very hope someone thanked you during your life here. You could not have imagined so many wonderful things we have today because of your labors, and how much farther we have to grow."

We may not know their names, but they are remembered. 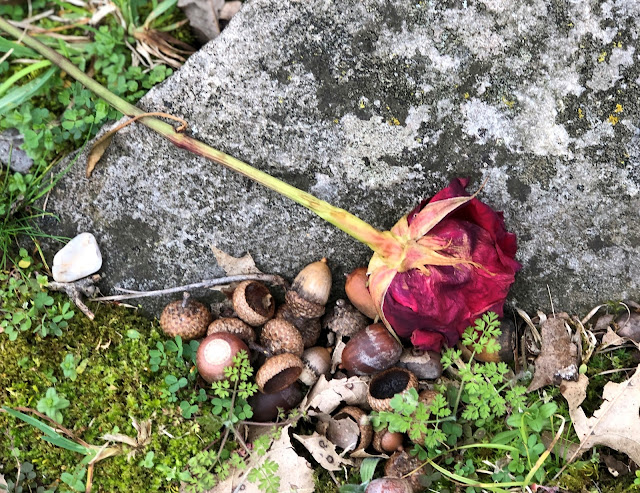