After Federal soldiers forced the surrender of the Confederate stronghold at Fort Fisher, Union sailors on ships in the Atlantic off the North Carolina coast climbed the rigging of their vessels, cheered wildly, and marveled at "a regular Fourth of July scene on the ocean."

The celebration of the enemy's surrender Jan. 15, 1865, was like few in the Union Navy had seen during the Civil War.

The land-and-sea assault on the strategic fort at the mouth of the Camp Fear River near Wilmington -- the "Gibraltar of the South," it was often called -- was successful but not without a high cost.

"Glory forever!"  Robert Hooker Gillette, a paymaster aboard the U.S.S. Gettysburg, hurriedly wrote his parents back in Connecticut late that winter night. "Fort Fisher and the entrance to Wilmington are ours. Everything we have been fighting for they have just surrendered. ... Our losses are heavy and we have had a hard fight, both on land and sea, but the result is glorious."

Nearly 1,100 Union soldiers, marines and sailors were killed or wounded in the assault -- including Roswell Lamson, the captain of the Gettysburg, who suffered severe arm and shoulder injuries.

At daylight the next morning, Gillette and a party of officers slowly made their way ashore to inspect damage at the vast fort. As the 22-year-old from Hartford and two other officers stood on the parapet at about 8:20 a.m., a massive explosion -- "something louder than the boom of a 15-inch gun," according to a Baltimore American correspondent -- rocked the fort's magazine.

"A volume of smoke and sand rose fifty feet in the air, enveloping and hiding from view the whole of the immense work for four or five minutes," the New York Times reported on Jan. 19, 1865. "It was at once apparent that the magazine had exploded, and that it must have been accompanied with great loss of life." The explosion was so great, in fact, that it caused a large crater nearly 50 feet wide.

Although he was nearly 50 yards from the magazine, Gillette was struck by pieces of timber, thrown from the parapet and killed -- one of perhaps 200 men from both sides who died in the blast. His body was found covered in sand.

(A Confederate torpedo or black Union troops were originally suspected of causing the deadly explosion; however, an official inquiry determined that careless Federal soldiers, sailors and marines -- many of them drunk, firing their weapons and carrying torches in the magazine of the fort -- were to blame.)

Lamson was especially shocked by the death of Gillette, who was "as near and dear to me as a brother," the captain wrote to the parents of his dead paymaster later that day.

"The joy of victory is saddened by the loss of our comrades," Lamson noted in the letter to Francis and Elisabeth Gillette, "and there is no one whose fall is more generally mourned than that of your son, who was loved and respected throughout the fleet."

For Gillette, it was a tragic end to a remarkable, short life. From a prominent Connecticut family -- his Yale-educated father was elected to the U.S. Senate in 1854 -- Robert had accomplished plenty by the time he was 22. As a teenager, he sailed around the world aboard a merchant ship and visited China. He later traveled to California to visit his 23-year-old  brother, Frank, who died of consumption in Sacramento before his arrival. Robert brought the body back East to be buried.

Initially involved in recruiting troops at the start of the Civil War, Gillette aimed to secure a commission in the 16th Connecticut in July 1862. Instead, he was commissioned as captain in Company K of the 14th Connecticut on Sept. 6. But the young soldier didn't catch up with his regiment in Maryland until Sept. 18, one day after the Battle of Antietam.

Inexperienced as a leader of troops, Gillette was initially reluctant to take his position as captain.

"... I do not really know what to do," he wrote his parents on Sept. 17, 1862 from Middletown, Md., about 15 miles from Sharpsburg. "I shall not do anything dishonorable, but if it is so that I can I shall fight on my own hook, in the ranks, as a private, to-morrow, rather than take my place as captain. I should like a few hours with my men before going into action."

When he arrived at the battlefield, Gillette was shocked by what he saw.

"The whole field is covered with the dead and wounded, and it is an awful sight," he wrote his parents on Sept. 18.  "We are expecting every minute the firing will begin. The enemy's lines are close by, and all that we are waiting for on both sides is rest."

After the 14th Connecticut moved to Harpers Ferry days later, a fatigued Gillette became ill with a dangerous fever that shattered his health. Resigning his commission, he returned to Hartford. But he couldn't stay out the of service long. In 1863, he was appointed an assistant paymaster in the navy, serving aboard ships blockading the North Carolina coast. He later rose to paymaster, a position that entailed ensuring sailors were paid their wages but also included duties as Lamson's right-hand man.

Throughout his war experience, Gillette often wrote his parents, describing in vivid detail the toll the fighting took on soldiers. In his final letter home, he described about the assault on Fort Fisher.  "The officers and sailors who were landed to charge the Fort have been slaughtered like sheep," he wrote, "and the sand-beach in front is covered with their dead bodies. I am saddened by the loss of so many brave men, but the victory is glorious."

Hours later, he too was dead.

Gillette was "a young man of unusual promise," the Hartford Press wrote in a lengthy obituary.

"He had good principles, and kept himself pure and upright," the newspaper said, "and his friends who were warmly drawn to him, by his affectionate and generous nature, saw no bad habits in him to overlook. His family have the heartfelt sympathy of the whole community." (9)

Robert Gillette's final resting place is in Riverview Cemetery in Farmington, Conn., a short distance from the Farmington River. His parents are buried to the right of Robert's gravestone, a block of marble topped by a slender, 5 1/2-foot stick of stone.

On the bottom right side of his tombstone are these words:

"I shall go into battle trusting in God that he will do by me what is best for us. All I hope is he will permit me to live. Soon all will be over and whatever is to be will have been." 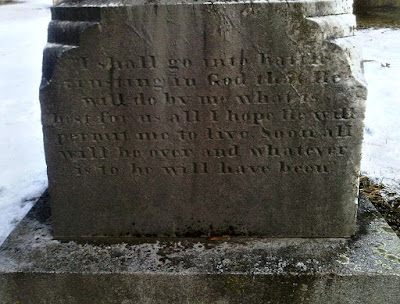 -- Have something to add (or correct) in this post? Email me here.