On a brisk October day, a couple from Michigan, a local historian and I stood in a parking lot that long ago was the front yard of a woman who knew Abraham Lincoln, marveling how we all connected. If anything, this Saturday afternoon proved that the Civil War really wasn’t that long ago and that Al Gore's invention is a pretty cool resource.

A little background: About 10 months ago, Cliff Alderman, a longtime president of the Unionville (Conn.) Museum, told me about a Civil War nurse named Maria Hall, who moved to Connecticut after the war and in 1872 married a wealthy manufacturer named Lucas Richards. The couple had two daughters and a son, whom they raised in stately mansion in the village of Unionville, about 15 miles west of Hartford. Alderman, whom I first met through my blog, wondered if I wanted to include the story of Hall in my book, “Connecticut Yankees at Antietam.” After all, Hall had served as a nurse at Smoketown Hospital, a large tent hospital placed among a grove of oak and walnut trees about a mile behind Union lines at Antietam. Well into my research on Connecticut soldiers who fought at Antietam, I had only lukewarm interest. But the drip, drip, drip of information about Hall supplied by Alderman over several weeks last spring eventually piqued my curiosity.

There’s a legislative file on Hall at the National Archives in Washington, he pointed out, and there could be a trove of information in it. Connecticut Civil War veterans spoke highly of her, said Alderman, who has an encyclopedic knowledge of local history. “She served at the White House,” he gently reminded me during a visit to the small Unionville museum one night.

This, I thought, may be a story worth researching after all.

An intense Internet search on Maria Hall revealed plenty of information, from a book published in 1866 that was digitized by Google to a 1921 magazine article that detailed her experience in Lincoln’s White House. Born July 1, 1836 in Washington, D.C., Maria was the only child of David Aiken Hall and Martha Maria Condit, who died a month after Maria was born. Her thrice-married 66-year-old father, a prominent lawyer, was much too old to serve in the army when the Civil War broke out in April 1861. But Maria, a staunch Unionist, did her part, taking in sick and wounded soldiers (including two from Connecticut) in the family home near the White House even before the First Battle of Bull Run in July 1861

At the beginning of the Civil War, young nurses were frowned upon by Dorothea "Dragon" Dix, the efficient but iron-fisted Superintendent of Army Nurses, who preferred they be over 30, plain-looking and wear drab, un-hooped dresses and forego cosmetics. Dix eventually took a liking to Hall, whom she recommended to help care for the Lincolns’ ill 8-year-old son Tad after the president's other son, 11-year-old Willie, died of typhus in the White House in early February 1862. At Smoketown, where Hall worked tirelessly until May 1863, she was praised by soldiers for her kindness. Hall later became chief nurse at a large Union hospital in Annapolis, where many Connecticut POWs were cared for after their release from Southern prisons.

Nine years after her death in 1912, The Delineator magazine published Hall's first-person account of her experience in the White House, which was in a state of mourning after Willie’s death. “…we went directly to Mrs. Lincoln’s room, and Miss Dix presented me to her,” Hall wrote. “And here was Mr. Lincoln standing before an open fire, his hands behind him and his tall, gaunt figure looming up as the center of interest. Miss Dix, introducing me, said: ‘You may feel she is too young to be trusted with your sick boy, but you will find her reliable.’

“I looked up at him,” the nurse wrote, “possibly with an appeal for a fair trial, for he approached me so kindly. Extending both hands to me, he said: ‘Well. All I can say is I hope she will turn to right away, for we need the help.’ ” Hall wrote of dining in the White House (“table talk was naturally of current events”); taking care of Tad (“a patient, uncomplaining young man”); and even getting the president’s autograph. He signed it “A. Lincoln,” Hall recalled, because that’s the way he liked to write it best.

Alderman gave me possible contact information for a Hall descendant culled from the Internet, so I eagerly dived deeper into the story of the young Civil War nurse. An e-mail to a woman in Michigan confirmed that she indeed was related to Hall, but her mother was the key contact. Days later, I received an e-mail from Barbara Powers, a retired teacher living in Michigan, who had a keen interest in the story of her great-grandmother, Maria Hall. Pleasantly surprised that I had tracked her down, Powers said during a phone conversation that the family had a wealth of information on her ancestor, whose first name was always pronounced Mar-I-YAH by Barbara’s father.

The Powers had a small block of wood in which the word “Antietam” was carved by a Civil War soldier, who gave it to Hall. Embedded in it was a bullet that, according to family lore, narrowly missed Maria. The family had a fragile old flag, possibly from a Civil War hospital, in an old suitcase. And they also owned letters in which Maria described her short experience in Lincoln’s White House. Those letters became a fabulous addition to the chapter on Hall that I included in my book. 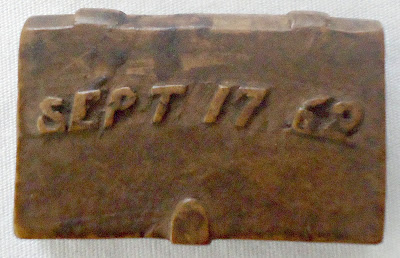 Today, the story of the 26-year-old nurse who cared for hundreds of wounded at a hospital near the Antietam battlefield came full circle for me. Barbara Powers and her husband, Dave, visited Connecticut for the first time this weekend. They stopped by the church where her great-grandmother and great-grandfather once worshipped. The stately mansion in which Hall raised a family has long since been torn down, replaced by a small building and a tiny parking lot. But Barbara Powers eagerly had her photo taken at the site where Maria and her three children probably played in the front yard so long ago. As the wind chased leaves in Hillside Cemetery overlooking Unionville, the Powers placed a pot of yellow flowers, courtesy of Alderman, near Lucas Richards’ grave. (Maria, who died July 20, 1912 at age 76, is buried in New Rochelle, N.Y.)

After the visit to the cemetery, Alderman, the Powers and I talked about their journey to discover more about their ancestor. “You can’t believe what this means to me and Barb,” Dave Powers said, thanking Alderman and me for helping tell Maria's story. And then I remembered a comment that Barbara recently posted on my Civil War blog Facebook page.

"My great grandmother, Maria," she wrote, "is smiling down on you."

No, the Civil War really isn't so far away after all.