Thanks to John Burnham -- an unsung hero of the Battle of Antietam -- the remains of Private Henry Barnett and other Connecticut soldiers killed during the bloodiest day in American history could be recovered by loved ones.

"The friends of the killed cannot be but deeply grateful to Adjutant Burnham for his thoughtful labors," the Hartford Courant reported nearly two weeks after the battle.

In a letter from Burnham to A.N. Clark published in the Courant on Sept. 30, 1862, the 16th Connecticut adjutant meticulously described the location of the large battlefield grave site for soldiers in his regiment. Each soldier's temporary resting place was marked by a small headboard that noted his name and company.

"There is a stone road running due east from Sharpsburg to the Stone Bridge across the Antietam Creek, for possession of which hard fighting took place in the morning," Burnham noted in a letter dated Sept. 19, 1862. "It is about one mile from Sharpsburg to the bridge, and the spot selected for the grave is about midway between them on a hill on the south side of the road, just back of a white house with a high piazza in front, and opposite of which is a large house and a barn."

The bridge Burnham referred to was the Rohrbach Bridge, which after the battle famously became known as Burnside Bridge. The large "white house with a high piazza" belonged to a 58-year-old farmer named  John Otto, whose 40-acre cornfield was a scene of slaughter for the 16th Connecticut, which suffered 43 killed and 161 wounded during its first fight of the Civil War.

"The bodies lie near a large tree standing alone, and which I had blazed on all sides so it can be easily discovered," Burnham's letter continued. "With the exception of Capt. (Newton) Manross, who was killed earlier in the fight and carried to the rear, they are all together ..."

A 30-year-old cigar maker from Suffield, Conn., Barnett was buried on the north side of that large tree along with his Company D comrades: corporals Horace Warner and Michael Grace and privates Nelson E. Snow and George Allen. (Privates Henry Aldrich of Bristol, John Bingham of East Haddam and Theodore DeMarrs of Cromwell and Sergeant Wadsworth Washburn of Berlin were also buried in the large trench.)

"I have been particular to mention the precise locality of each (body)," Burnham wrote in the letter, "so that in the event of the signs being displaced by the elements or otherwise, they may be found; and I trust that anyone who comes to the spot will be very particular and disturb none but those of whom they are in search."

Added Burnham: "The collection of the bodies was conducted under my own personal supervision, and after the men had reported them all picked up I examined the whole field myself, so that I am confident none were left on the ground."

Burnham's description undoubtedly made it easier for Barnett's wife, Emily, to have Henry's remains retrieved and returned to Suffield, a small town in northwestern Connecticut near the Massachusetts border. She buried her husband in Old Center Cemetery in Suffield. The young soldier who was born in England left behind two young children, Catherine, 8, and Morris, 5. Emily was pregnant with the couple's third child, a girl she named Rosetta, who was born Jan. 30, 1863.

Promoted to lieutenant colonel shortly after Antietam, John Burnham was described as a "perfect soldier" in the 16th Connecticut regimental history. Even his mother was beloved. During a camp visit, the 70-year-old woman "advised and comforted those in trouble, listened to complaints and nursed the sick. She was regarded as a representative of the good respectable home life which we had left, and to which we would sooner or later return, and the veneration and affection of the regiment for her was unbounded." (1)


But Burnham also suffered misfortune during the Civil War. He was slightly wounded at Suffolk, Va., on May 3. Captured with nearly his entire regiment at Plymouth, N.C., on April 20, 1864, he was imprisoned at infamous Libby Prison in Richmond and in South Carolina and Georgia before he was exchanged in June 1864. Captured again in September 1864, this time by guerrillas while he was on the steamer Fawn in North Carolina, he was exchanged on Oct. 15, 1864.

"Regarded with as much love as can find room beside the respect due to a regimental commander,"  Burnham survived the war. (2) But broken down physically and mentally, he died at  the Connecticut Hospital for the Insane in Middletown on April 10, 1883. He was 43 years old. 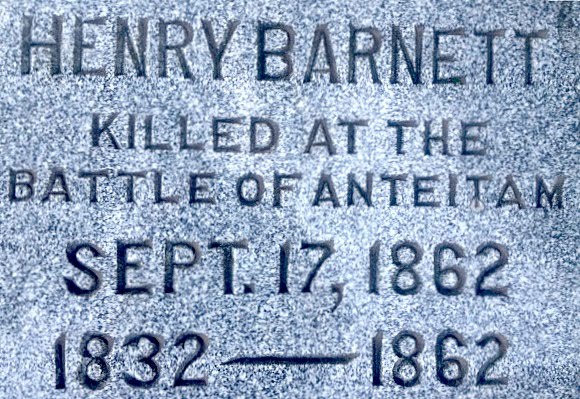